A new partnership for Swan Racing

"Anthony (Marlowe) is the perfect fit for the team and will be an integral part of it going forward.", said team owner Brandon Davis

Swan Racing announced the addition of Anthony Marlowe as a minority owner. Marlowe, a successful business leader from Iowa City, IA, has been involved in NASCAR as a sponsor with different teams since 2011. 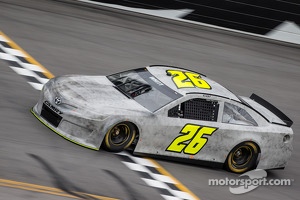 His leadership and his experience with business-to-business deals will be increasingly valuable to the team as it seeks additional partnerships.

"Anthony is an entrepreneur like me," said team owner Brandon Davis. "He has the same work ethic and the same approach when it comes to finding creative and innovative solutions. Anthony is the perfect fit for the team and will be an integral part of it going forward."

"This is a remarkable day, which for me marks the intersection of my passion for NASCAR and my dream of owning part of a professional sports team at the highest level," said Marlowe. "I kept a close eye on Swan Racing during its inaugural season last year and was so impressed with Brandon Davis, the way they do business, and their pursuit of excellence that I wanted to be part of his Cup team for the long-haul."

Brandon Davis purchased the team back in 2012. He will field two teams in the 2014 season for young, up and coming, drivers Cole Whitt, #26 Toyota, and Parker Kligerman, #30 Toyota. Both drivers will be competing for the 2014 Rookie of the Year title.

A new deal fit for a king

Erik Jones on bizarre final restart: "It was pretty disrespectful"