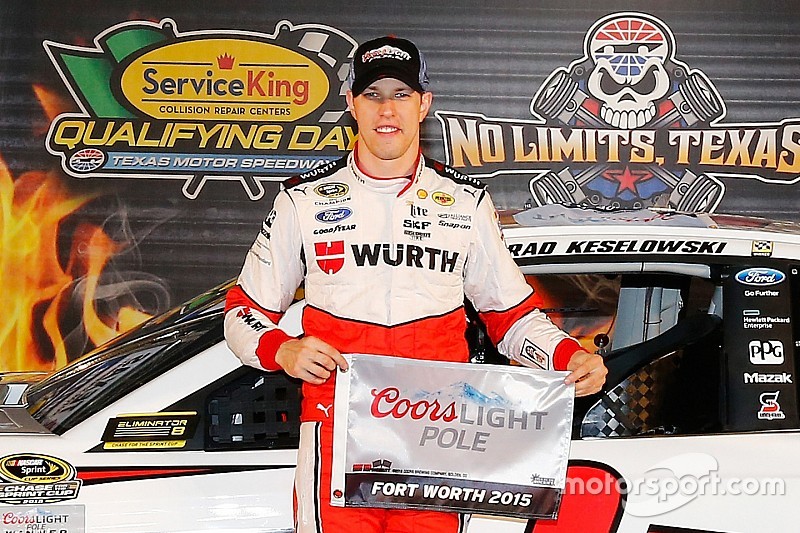 Brad Keselowski was a speed demon during time trials for the AAA Texas on Friday.

Keselowski led all three rounds of qualifying at Texas Motor Speedway — but it was his final — and money lap of 196.929 mph (27.421-sec.) that earned the Team Penske driver the pole for Sunday’s race.

“This is a good start but our ultimate goal is to be the fastest at the end of the race on Sunday,” said Keselowski, who earned his third pole of the season and his 11th career Cup pole overall.

“It is a good start and it gets us up front with a great pit stall and hopefully we can make the most of it.

The last time Keselowski earned the pole was at Kansas Speedway three races ago. However, due to NASCAR penalizing the No. 2 Miller Ford due to inspection infractions, he forfeited the ability to choose the first pit stall.

"I think that shows a lot about what our racecar is going to be like in race trim and just how consistent it was throughout the speed on each round," Harvick said. "Our Budweiser/Jimmy John’s team did a great job in keeping up with the changes that we needed throughout the three rounds and we were able to keep it pretty consistent.”

Despite struggling with balance issues, Dale Earnhardt Jr. was 10th quick with a lap of 195.440 mph.

“I didn’t move the track bar because I didn’t think I needed to,” Earnhardt told his crew chief Greg Ives. “It felt so weird — completely different. Like I was in the middle of the car.”

“I don’t know what we’re missing, but we’re missing something,” said Jeff Gordon, who will start 18th in his final Cup race at Texas Motor Speedway.

Team Penske also lit up the top of the pylon in the first session with Brad Keselowski besting his teammate with a lap of 198.282 mph (27.234-seconds).

Joey Gase and Reed Sorenson failed to qualify for the AAA Texas 500.