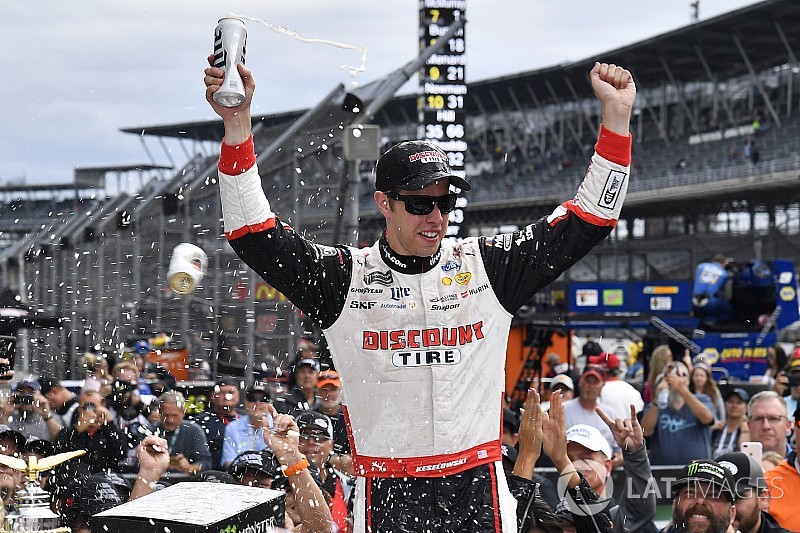 Brad Keselowski prevailed in a thrilling battle for the win with Denny Hamlin, giving Roger Penske his first Brickyard 400 victory after 25 years of the event.

Clint Bowyer led the way on a Lap 106 restart to kick off the final stage. With William Byron struggling to get going, Denny Hamlin quickly moved into the second position.

Stage 2 winner Matt Kenseth restarted back in ninth after pitting during the stage break, but he did not waste any time moving forward through the field. By the time the final round of green-flag pit stops began, he was in sixth and knocking on the door of the top-five.

Up front, it continued to be Bowyer with Hamlin stalking close behind. With 41 laps to go, Kyle Busch was forced to pit right at the edge of the pit window with a flat right rear tire.

Hamlin came down pit road with 35 laps to go, but Bowyer waited two more laps before he made his stop. That allowed Hamlin to move ahead, but they remained close as the pit stops cycled through.

Both Blaney and Kenseth saw potential top-five finishes slip away as Blaney blew through his stall and Kenseth’s car fell off the jack.

With 17 laps to go, Brad Keselowski was one of the last frontrunners to pit, doing so mere moments before the caution flew for debris on the frontstretch.

On the following restart, Hamlin was able to get away as Bowyer was harassed by Jamie McMurray for third.

With the freshest tires, Keselowski quickly charged through the field and with seven laps to go, he was up to third.

But at that moment, a massive incident took place involving Landon Cassill and Jeffrey Earnhardt, sending the latter driver airborne.

The race went back green for a three-lap shootout. Bowyer spun the tires, giving way for Keselowski to go after Hamlin. The two veterans went door-to-door with two laps remaining, making contact as Keselowski clawed his way by.

At the white flag, Erik Jones was able to overtake Hamlin, but he could not run down Keselowski, who delivered Team Penske their first ever win in the Brickyard 400.

I gotta give credit where credit is due," said Keselowski. "My crew chief, Paul Wolfe, made a heck of a call to pit there late in that run and the yellow came out and we had new tires and started eighth and it was kind of like it gave me the ball. You know how that goes. I had to make a play. I knew it was going to be tough. We weren’t a dominant car by any means but Paul and everyone executed an incredible race. I just had to do my job and here I am in victory lane at the Brickyard. Man, I wish RP (Roger Penske) was here. I know he is watching at home. What a day!”

The 'Captain' himself issued a statement on the win, saying, "This is certainly a great win for Team Penske. The Indianapolis Motor Speedway is such a special place to me personally and the success we have enjoyed there has really helped build our team and continue to raise our level of performance. Earning Team Penske’s first win in the Brickyard 400, especially coming just a couple of months after winning the Indianapolis 500, is a credit to everyone that works so hard throughout our organization. Congratulations to Brad (Keselowski), Paul (Wolfe) and everyone on the No. 2 Discount Tire Ford team. Well done and now we look forward to the opportunity to pursue Team Penske’s 500th win!"

Hamlin was third, Harvick fourth and Bowyer ended up fifth.

CLICK HERE to see which 16 drivers will battle for the 2018 NASCAR Cup title.