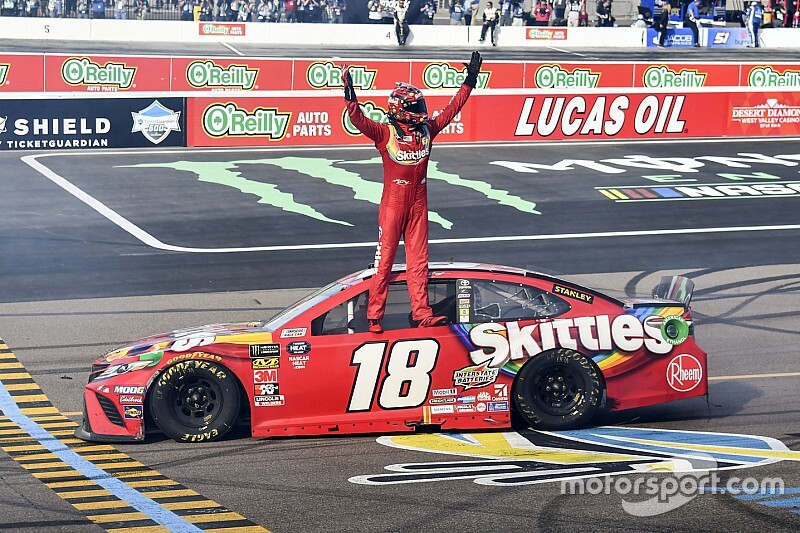 Joe Gibbs has coached his share of exceptional athletes and he has no doubt Kyle Busch possesses a talent matched by few others.

Busch’s victory in Sunday’s Monster Energy NASCAR Cup Series race at Phoenix was his 52nd in the series and the 199th of his career across all three NASCAR national series – Cup, Xfinity and Trucks.

His 52 Cup wins, 94 Xfinity wins and 53 Truck victories have all come before his 34th birthday – an astonishing achievement all on its own.

“It happened in football where we had some guys that all of a sudden on Sundays when they put the helmet on, you kind of look at them, they get it,” Gibbs said Sunday at ISM Raceway. “They know what the sport’s about. They are after it. They’re determined. It’s not often you find it.

“Certainly I think with Kyle, over here in this sport, I think Kyle is one of those guys. When he puts the helmet on, if there's something in front of him, I don't care whether the car is able to get there or not, he's trying to get there.

“I just think he’s an unusual talent. I think all of us that watch sports, me included, really appreciate those great athletes. Somehow they have a gift.”

Gibbs, owner of Joe Gibbs Racing and a three-time Super Bowl winning coach with the Washington Redskins, said he has noticed over the years that Busch is someone who is driven by “real goals” he sets for himself.

“I know how bad he wanted to be able to win at every race track, because I could pick up from him, talking, how bad he wants things,” he said. “I think he’s driven by trying to do something great.”

Busch will have two opportunities to pick up NASCAR win No. 200 next weekend at Auto Club Speedway in California as he will be competing in both the Xfinity and Cup series races.

Gibbs said when Busch does garner that win, “it will be a big deal for him.”

“I wasn’t any kind of a real good athlete, so I don’t know, but sometimes great athletes like that think a little different,” he said. “I do think he’s challenged by things and loves the idea of accomplishing some real goals.”

The green flag has dropped on NASCAR's first esports venture