Ther accident was during the first practice session at Daytona International Speedway and will be forced to a back-up for today’s Duel event.

Joey Logano – No. 22 Shell/Pennzoil Ford Fusion – “We were coming off four there and the 20 started making a move to go down. I assumed he was gonna go down there. I had the run, so I was gonna fill that hole and then he started to come back up and I was there. 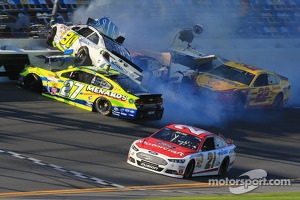 Maybe I shouldn’t have been racing as hard as I was there in practice, but everybody was in a big pack there trying to make things happen. As soon as he came back up I checked up a little bit and then the 21 hit me from behind and we spun out. It happens. That’s Daytona for you. We have another good Shell/Pennzoil Ford in the trailer that they backed out and are getting through tech now so we’ll get that out and make sure it’s good for the Duel and get through that and we’ll be fine.”

WILL YOU TALK TO MATT? “I talked to him earlier today. I’m sure we’ll talk about it. I don’t know what there is to talk about, but us drivers always find each other in the motorhome lot to talk to about it.”

IS IT SURPRISING THIS WOULD HAPPEN IN PRACTICE OR IS IT PAR FOR THE COURSE HERE? “It happens every year. You always hope you’re the one that’s not in it or you miss it. I saw it getting kind of crazy out there and you’re kind of in the middle of it and you can’t really get out of it at that point when you’re in the middle. It was a little too late.”

SURPRISING IT WAS MATT? “It could be anyone. We’re all out there trying to learn about our car and put our car in spots to try to learn about what we can do to make it better and that’s what happens.”

ANY MORE PRESSURE FOR THE DUEL TOMORROW? “We obviously can’t afford to wreck another one. This next car is our second-best car. We didn’t race our best car in the Sprint Unlimited. We raced our third-best car there, but now we’re down to our second-best car to run the 500, so that’s not ideal but Penske does a great job of getting these cars very similar so it’s not like they’re way, way different.”

WHAT DOES THIS DO TO YOUR HEAD WHEN THESE THINGS HAPPEN? “It’s tough, but that’s racing and that’s what happens out there. These guys put their hearts and souls into these race cars, so it’s unfortunate when you see them getting torn up, but Team Penske does a great job of making these cars very similar and this next one will be just as good.”