Much work remains on NASCAR’s Next Generation car but following his first test in the car, Erik Jones can already see significant changes. 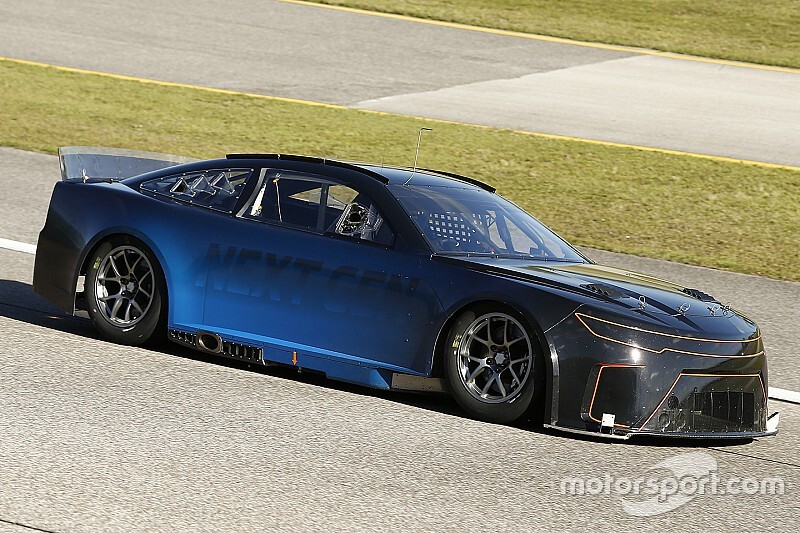 Jones served as the driver during a two-day test at Homestead-Miami Speedway this week with NASCAR’s new car design, which will debut in the Cup Series in the 2021 season.

While the test car still has a manufacturer-generic overall design, several features continue to stand out, including the far more stock-looking wheels and wheel well, body side molding and character lines, hood design and air exhaust vents built into the rear bumper.

The on-track was the third for the car but first on an intermediate track, on which much of the series’ competition is conducted.

“Richmond seemed to be more of a systems check than anything. Phoenix was more developed and working getting the car better and better and improving things,” Jones said.

“We started here with sort of a baseline systems check for a mile-and-a-half track to get a good base of what they’re going to work on over the next few months, and what direction to go.”

And Jones noticed differences from the current car almost right away.

“It’s definitely a big aero change. We have a lot of sideforce in our cars now and there is a lot to lean on – when you get loose the car kind of corrects itself and straightens itself out. This car doesn’t really have any of that,” he said.

“The quarter panels are so short and there’s no offset in the car – it’s very symmetrical – so there’s not a lot to lean on in this car. I think a lot of the aero changes they’ve done are going to help as far as racing goes, especially racing in a pack. Other than that, as we were working on things, some driving characteristics are similar.

“I think there is definitely more grip to be had as far as what the car is capable of. I think as far as development goes, there is going to be a lot more mechanical grip available than what we currently have.”

Jones’ biggest challenge may have been adjusting to a sequential shifter, which is used in the car.

“The shifting has been fun, it’s been different. I’ve never done anything other than normal H-pattern shifting in my career,” he said. “You can bang right through the gears; we did a restart at the end of the day yesterday and it was fun learning about that and how you can push that gear box.

“That really gets you excited for the road courses and what it’s going to be capable of there.”

“There are some logistical reasons that make sense for us to stay and test. But it’s also important to get some ‘rubbered-in’ (track) conditions of what it’s like in a race. We want to replicate that as best as we can so when we go back to race, there are no new lessons to learn,” he said.

“We still look forward to taking this to superspeedways and road courses, we have a lot to learn there as well. We’ll go back and iterate on what we have now, but we feel like we’re in a good spot. We’re going to keep developing and working on what we’ve got, and we think we’re going to end up with a really good product.”

Probst said the NASCAR team has already started manufacturing the Phase 3 prototype version of the Next Gen car.

“It will take all of the lessons learned from the tests we’ve previously had. Once that is built, we’ll probably start using this car as a ‘second car’ to start simulating cars in traffic to see what we can learn from that,” he said.