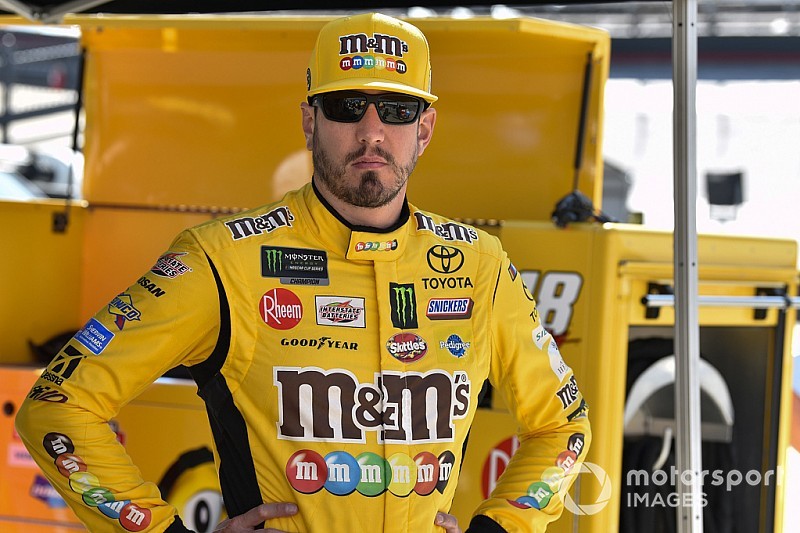 Kyle Busch isn’t accustomed to getting outrun at Bristol (Tenn.) Motor Speedway and even less so by his teammates at Joe Gibbs Racing.

On paper, Busch’s fourth-place finish Saturday night in the Bass Pro Shops Night Race doesn’t sound horrible, but it was an atypical Bristol weekend for Busch from start to finish.

Busch entered the race having won three of the previous four NASCAR Cup Series races at the track, including the race in the spring.

This weekend, he and his No. 18 Toyota team were off the mark from the get-go, qualifying just 31st, which led to him falling a lap down early in Saturday night’s race.

He managed to get back on the lead lap on Lap 214 of 500 and even led 30 laps in the race thanks to staying out on older tires after Stage 2. But Busch was nowhere near as stout as his JGR teammate Denny Hamlin, who came from two laps down to win the race.

“It’s better than some other situations, for sure,” Busch said about salvaging a fourth-place finish. “Adam (Stevens, crew chief) and the guys do a really good job of being able to work on the car and constantly improve it and constantly make it better.

“But (we’re) flat out getting our ass kicked right now by our teammates, so we’ve got to get better.”

Despite his car being “too loose” late in the race, Busch did manage to catch the fourth-place car of Chase Elliott and pass him with less than 20 laps to go.

He came within striking distance of third (Brad Keselowski) with five to go but, unable to make a pass, finished the race in fourth.

“The car just wasn’t there really all weekend long. I just never really found what I was looking for. We were kind of all over the place,” Busch said. “Early on, we were so loose that I was just barely hanging on and trying to make up time there.

“We finally got it tightened up enough there when I was racing with (Keselowski) and got the lead from (him) before that caution came out. Then we tried to make it a little bit better for exit after that because we were going to go a long ways on tires we figured and just made it too loose.

“I just had no rear traction getting into the corner. We salvaged a hard-fought day for fourth. That’s about it.”