Kyle Larson's tough night at Kansas may yet get worse 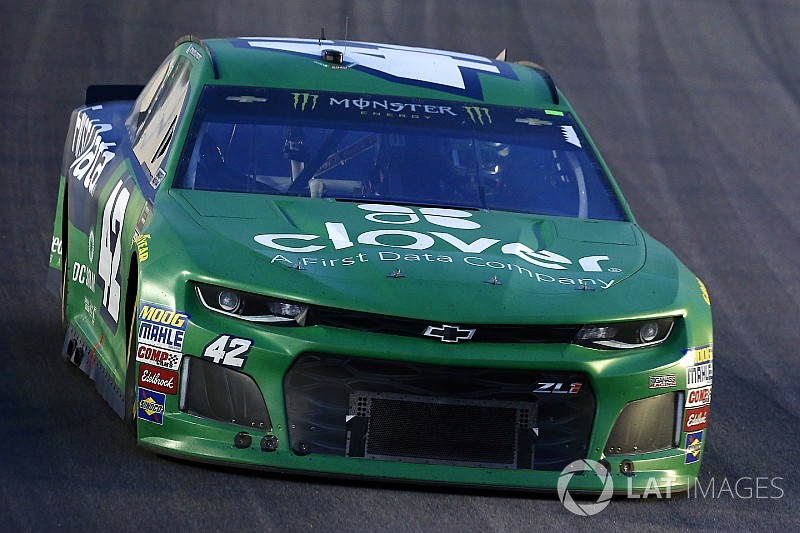 It was a tough night at Kansas Speedway for Kyle Larson and it could get even worse.

Larson started the race from the rear of the field but by Stage 2 had found his way to the lead and looked like the only driver capable of challenging Kevin Harvick for the victory.

But his chances at his first win of the season took a big hit on Lap 249 of 267 after he was involved in an incident with Ryan Blaney racing for position. Blaney drifted up the track and hit Larson, then hit the wall and Larson had taken damage to the left-rear of his No. 42 Chip Ganassi Racing Chevrolet.

Larson was able to continue and eventually finished fourth but the Fox Sports 1 TV announcers made note of a significant dent in his rear window late in the race.

NASCAR inspectors swarmed the car after the race and announced later it was being taken to its R&D Center in Concord, N.C., for further inspection.

Any penalties would be announced later this week.

Several teams – including Kevin Harvick, Clint Bowyer and Chase Elliott – have already been penalized this season for violation of a rule requiring the rear window must remain rigid throughout the entire race event.

After the race, Larson said he believed the window problem was a result of his run-in with Blaney.

“I didn’t have it until after Blaney and I got together,” he said. “So, I’m glad to see that we have a lot of damage back there because obviously if there was no damage back there, we would probably get a penalty, and who knows, we might still.