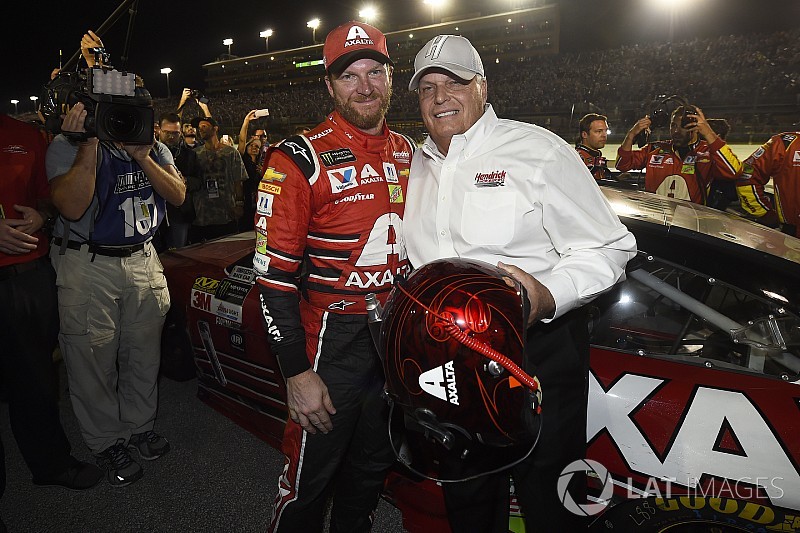 Dale Earnhardt Jr.’s No. 1 request following his final race was to “have a beer with his guys.”

It wasn’t long after his No. 88 Hendrick Motorsports Chevrolet came to a rest on pit road that the party started with cases of beer – Bud and Bud Light – rolled up to the car.

It raged for nearly an hour, as media, team members, friends and many race fans gathered in a protective circle around NASCAR’s most popular driver.

There were interruptions from several visitors, including team owner Rick Hendrick, Earnhardt’s wife, Amy, and his mother, Brenda.

But for the most part, the time was filled with laughter, cheers, screams and toasts to crew members or for no reason whatsoever.

Several team members asked Earnhardt whether they were coming back to his place for party after the race. Amy, who is pregnant with the couple’s first child, quickly said, “Maybe Monday.”

Then the chants began, “Monday party!”

It was just the way Earnhardt hoped it would go.

“I’m surprised, really, with anything and everything that happened to me in my career. The accomplishments, all the material stuff as far as the money, the celebrity and all that – I never dreamed of that,” he said.

“When I was in high school, this is not what I saw for myself. When I was young I just did not see this happening to me. And I feel like that was yesterday, not a long time ago. I wake up and have to pinch myself all the time, conscious about thanking people around me about how lucky I am to have them.

“You wonder, ‘How did this happen to me?’ and how I found myself in this position. You’re just overcome with that and can’t get past it. But it’s been so good and a lot of fun.”

Respect between owner and driver

Hendrick and Amy were the first to greet Earnhardt at his car following his 25th place finish in Sunday’s Ford 400 at Homestead-Miami Speedway.

Hendrick had made a deal with Earnhardt that if he finished the race, Earnhardt could keep the No. 88 Chevrolet from the race and Hendrick got to keep the helmet Earnhardt used in the race. It was similar to a deal he made with four-time champion Jeff Gordon two years ago.

“I don’t want any more helmets,” Hendrick said. “He and I have such a special relationship. We were talking about that and going finishing. It’s unbelievable to see his driving career come to an end.

“He’s excited about the next stage and I am, too. We have a special bond. We’re going to do a lot of fun things together. That’s a commitment we made early on when he told me he thought it was time to step away.

The race began with Earnhardt driving slowing down pit road, slapping hands with crew members from every team assembled on pit road. It was reminiscent of the scene following his father’s only Daytona 500 victory in 1998.

His final race as a fulltime driver ended Sunday night with a party.

He wouldn’t have it any other way.