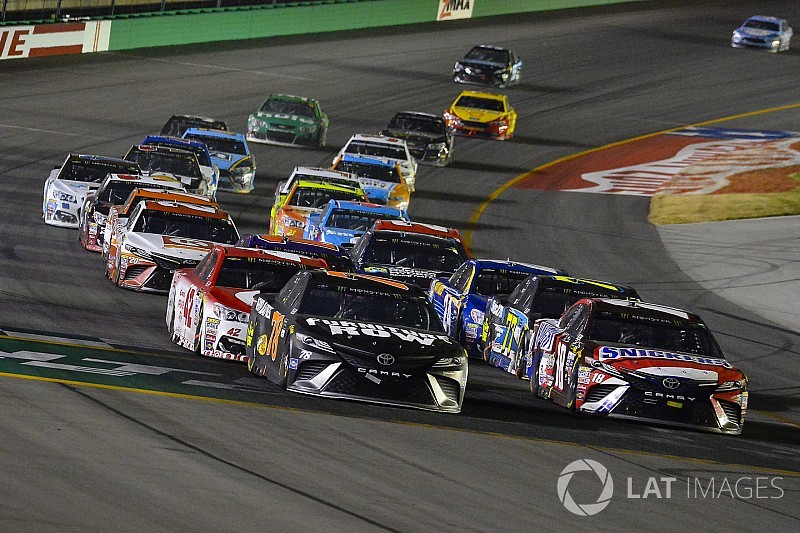 The deck was stacked against Kyle Larson from the start of Saturday night’s Quaker State 400 at Kentucky Speedway and it only got harder as the night went on.

Still, Larson managed to come away with a second-place finish, the sixth time this season he has finished in the runner-up position. He didn’t have much for race-winner Martin Truex Jr. though, who led a race-high 152 of 274 laps and at one point held a 15-second lead on the competition.

Larson started the race dead last after his No. 42 Chip Ganassi Racing failed to clear pre-qualifying inspection on Friday.

He had little trouble making his way through the field once the race started but he got sent to the back again following a pit road speeding penalty on Lap 83.

“Didn’t get to qualify, had a pit road penalty at the end of the first stage. Went from the back to the front and then we had scuff (tires) on one run and got the balance off pretty bad, but were able to put (new) tires on and charge back to the front,” Larson said.

“We had a great car. Truex though, I never got to see him that last run he was upwards of 15 seconds ahead of us. That was pretty crazy. He has definitely been the fastest car all year. So, got some work to do, but if we can keep chasing him, I think we can beat him.”

Larson got an unexpected final opportunity when Kurt Busch’s engine blew and a caution came out with one lap remaining. That sent the race into overtime with Truex in the lead and Larson lined up behind him on four new tires.

He gave Truex a shove on the restart, hoping to force the field three-wide, but Truex was able to clear Larson for the lead and his win was secured when another caution came out on the final lap.

“Our car was really, really good at launching (on restarts). That was the best my car has felt with the engine launching. Normally, I feel like we’re just average,” Larson said. “I didn’t think he would be that good on (old) tires.

“I thought maybe if I could get locked on him we could maybe both clear Kyle (Busch) and I would get a shot at him in (Turn) 3.”

Larson said his repeated trips through the field may have affected his ability to stay with Truex late in the race.

“Really, I lost a lot of track position in the second stage and maybe I had restarted closer to him I could have gotten in front of him on a restart or something and held him off for a long time,” he said.

“Probably not, though. He was really fast. He held a 15-second on us – kind of hard to beat that.”