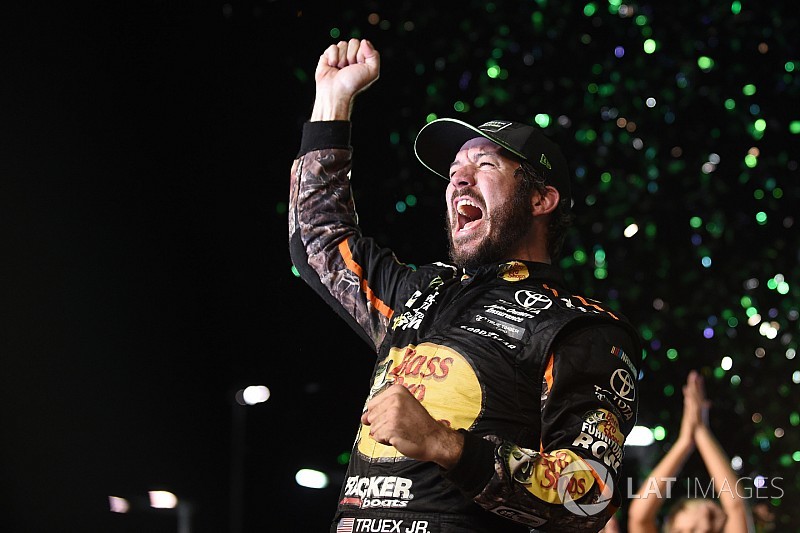 Martin Truex Jr, fought through adversity – and fought back the tears – as he captured the Monster Energy NASCAR Cup title with victory at Homestead-Miami.

Truex won eight times in 2017, but Sunday’s victory in the EcoBoost 400 was the sweetest of all.

“We just never gave up all day long,” Truex said. “We didn’t have the fastest car, but we dug deep…made it happen. I wanted this ever since I was a kid. Just never give up, never give up.”

Truex took the outside line for the restart on Lap 166. Truex shot out to a four-car lead over Kyle Busch as the sun began to set on the 1.5-mile track Harvick took third from Larson, Logano ran fifth followed by Kenseth, Kurt Busch, Hamlin, Keselowski and Elliott.

Truex held a half-second lead with 100 laps remaining. Larson caught Logano and passed him in Turn 3 for fourth on Lap 175. Kyle Busch went low on Truex for the lead on the next lap at the line. Truex regained the point on the backstretch but Busch closed the deal by Lap 178. Larson passed Harvick on Lap 181. Crew chief Rodney Childers told Harvick there was a hole in the right front fender of the No. 4 Ford.

With 85 laps remaining, Busch moved out to a two-second over Truex. Larson ran third followed by Harvick, Kenseth, Logano, Hamlin, Kurt Busch, Austin Dillon and Keselowski. By Lap 190, Busch pulled out to a 2.5-second lead on Truex. Keselowski fell out of the top 10.

Larson rode the outside line around Truex out of Turn 4 for second on Lap 195. Keselowski, who passed Dillon for ninth, pitted with Kurt Busch on Lap 198. Harvick, Truex, Logano and Bowyer followed on the next lap.

Busch retained the lead followed by Larson, two-seconds behind. Kenseth, Hamlin and Suarez also remained on the track. Truex cycled out to seventh with 60 laps to go. After a lengthy stop to repair his fender, Harvick was eighth, one lap down. Logano, Keselowski, Kurt Busch, Elliott, Bowyer, Austin Dillon and Newman rounded out the top 15. On Lap 207, Truex passed Suarez for fifth. Harvick moved back on the lead lap in seventh.

Larson pitted on Lap 213 with Hamlin and Suarez. Kenseth came on the next lap and Busch gave up a 21.4-second lead for service on Lap 216. Truex inherited the lead followed by Harvick, Logano, Keselowski, Larson, Kyle Larson, Elliott, Kyle Busch Kurt Busch, Clint Bowyer and Austin Dillon with 50 laps to go.

Larson passed Logano for third. Kyle Busch passed Keselowski on Lap 221 for fifth and moved up to fourth on the next circuit after moving by the No. 22 Ford. With 40 laps remaining, Truex’s lead was 3.8-second over Harvick. Keselowski reported a brake rotor in Turn 3 after Daniel Suarez hit the wall on Lap 224. Two laps later, Kurt Busch spun between Turns 3 and 4 to bring out the fifth caution. He was running in the top 10.

Logano moved up to second after the first circuit. Harvick, Hamlin, Kyle Busch, Larson, Keselowski, Kenseth, Elliott and Dillon rounded out the top 10. Harvick moved back to second on Lap 236. Harvick settled into the low lane with 30 laps to go but trailed Truex by a half-second. Elliott passed Kenseth for seventh on Lap 240. Kyle Busch caught Logano for second on Lap 243. Harvick cut Truex’s lead to .379-seconds on Lap 245.

With 20 laps remaining, Truex pulled out to a .736-second lead. Kyle Busch ran third followed by Larson, Logano, Elliott, Keselowski, Kenseth, Hamlin and Austin Dillon. Kyle Busch passed Harvick on the backstretch for second on Lap 249. Larson caught Harvick off of Turn 2 with 15 laps to go for third.

“I need help,” Truex yelled as he approached lap traffic and Busch closed to within a half-second.

Kyle Busch moved to the low line to gain on the No. 78 Toyota with five to go and Larson closing in. But held the position to the finish.