Erik Jones didn’t need additional motivation to win but watching your three teammates rack up victories over the course of a season didn’t sit well with him. 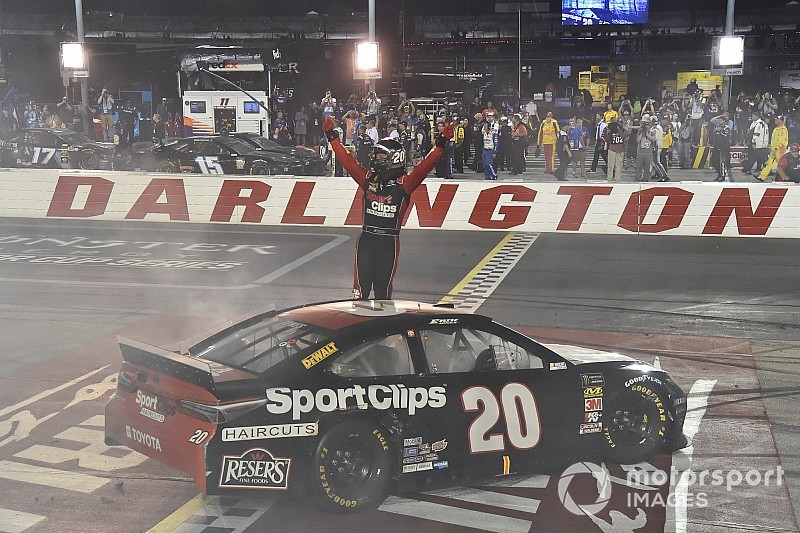 Jones had earned his first Monster Energy NASCAR Cup Series just last summer at Daytona, but 2019 was always going to be a critical season as it was a contract year for Jones at Joe Gibbs Racing.

So, as the 2019 season has neared the end of the regular season, Jones had seen his teammates – Kyle Busch, Martin Truex Jr. and Denny Hamlin – win a collective 12 times in the first 24 races.

Until his victory in the early hours Monday morning in the rain-delated Southern 500 at Darlington, Jones had been left with several near-misses while also sweating out a contract extension.

“You get to this level and … it’s really challenging, and it’s definitely the biggest challenge I’ve had probably in my life,” Jones said. “Getting to this level and trying to get to the same level that Martin and Denny and Kyle are at is not easy.

“It takes a lot of time. You want to expedite that process, but sometimes there’s no other lesson than the ‘hard knocks’.”

After Monday’s victory, both of Jones’ problems now seem to have been resolved.

“So, I’m trying to do everything I can and apply everything I’ve learned in three years, and it took every ounce (in the race); I was pedaling hard at the end doing what I could trying to get a gap and keep them behind me.”

Beating one of the best

It certainly wasn’t easy as Busch – who worked feverishly in the final 40 laps to get around Jones and win the race himself – is one of the drivers from which Jones has gained invaluable experience in his young career.

“It takes a lot to race with Kyle, right. He’s really smart, he’s really good, and he’s in his prime, man,” Jones said. “He was really good in his 20s and now he’s matured into his 30s and he’s one of the best guys out there if not the best guy.

“It takes a lot to beat him, especially when you’re in the same equipment. It was definitely a lot of pressure with him breathing down my neck there.”

While trying to run down Jones, Busch ended up running into the wall twice in the last four laps, which left him hanging on for third-place at the finish and Jones headed to Victory Lane.

Even without the win, Jones and his No. 20 Toyota team were well-positioned to qualify for the 16-driver Cup series playoffs.

Locking in the playoff berth through a win removes all doubt and also shows Jones is just as capable as his teammates to challenge for more wins or even the championship.

“Obviously we’ve sat around and watched the other three guys winning four races and wanted to be a part of that, and it's been an up-and-down year where various things have kept us from reaching our potential,” said Jones’ crew chief, Chris Gayle.

“But I think if you look over the last eight to 10 weeks, there’s only been a couple of races that we haven’t been in contention to get that win every week. We’ve been talking about that.

“That’s just what we focus on, doing that every week, and we’re going to get those wins, and more are going to come.”