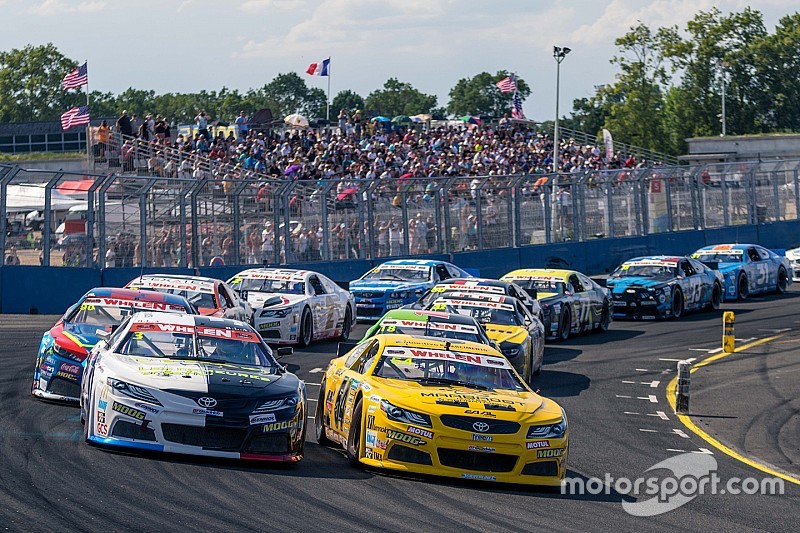 Former NASCAR Next driver and Israeli native Alon Day picks up his first Whelen Euro Series win on an oval track on Sunday.

Defending NASCAR Whelen Euro Series champion Alon Day is no stranger to winning races, but they have all been on road courses. Not any more.

Day held off former NASCAR Cup Series champion Bobby Labonte to pick up the Elite 1 division win on Sunday on the oval track at Tours, France.

It was the 14th career win for Day and his fourth win of the season.

“I wasn’t the fastest today but it was great teamwork on CAAL Racing’s side,” said Day. “I had a quicker time than (Frederic) Gabillon in the semi-final race so I started from the pole position. Since then, I just defended like hell.

“The CAAL Racing team did an amazing job today. I won over a NASCAR Cup Champion today and that is something incredible. He was there in the last few laps and he was on my bumper, I thought that I wouldn’t gonna do it but I fought until my last breath. I am happy but also really, really exhausted.”

After mechanical problems forced him out of the race on Saturday, Labonte put up a fantastic show on Sunday. He finished fourth in his semi-final and started seventh in the finals.

Labonte took advantage of the new cone rule for this race to move up and challenge Day near the end of the race.

After the late caution, Saturday’s race winner Frederic Gabillon opted for the outside lane to try to sweep the weekend and the move didn’t pay off.

Labonte started right behind Day and did everything he could to pass the leader over the final four laps of the race but Day held him off in an exciting battle.

Although he didn’t get the win, Labonte celebrated his first podium finish in the NASCAR international series.

“It was such a hard race because of the grip level and the degradation of the tires,” said Labonte after the race. “The car changed a lot and the bottom line was always the groove.

“Alon did a great Job holding his line. I got to his bumper but you don’t crash people to win a race. He didn’t do anything wrong. I tried to get him and maybe there was a chance with a few more laps. My team did a great job and today was a good day but first would have been better.”

While his late-race decision didn’t pay off with a second consecutive win Gabillon, his team will be invited to the July 12-15 Goodwood Festival of Speed, after which Gabillon will head to Canada to take part in the NASCAR Pinty’s Series race at the hugely popular GP3R at Trois-Rivières on Aug. 10-12.

Day and Labonte were joined on the podium by Romain Iannetta came home third to score the first ELITE 1 podium for Go Fas Racing with a huge comeback from last on the grid. Loris Hezemans and Alex Sedgwick rounded out the top 5.

Ulysse Delsaux led every lap in the Elite 2 division race for the second day in a row to sweep both races on the oval track.

“It’s the first time ever for me to win two consecutive races in NWES,” said Delsaux. “I’m so happy, this was a great weekend for the team. Thanks to my crew for giving me such a great car today. It was fantastic. Now I am looking forward to the playoffs.”