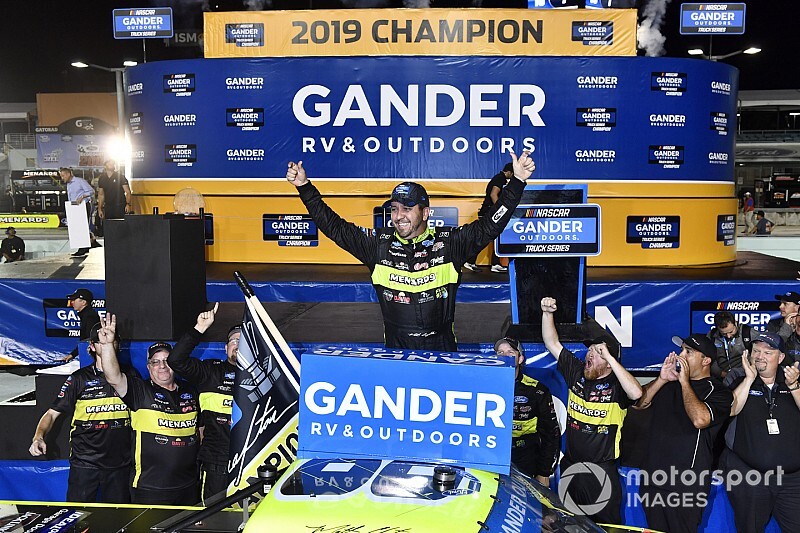 Matt Crafton didn’t win a race this season but didn’t have to in order to capture his third Gander Outdoors NASCAR Truck Series championship.

Crafton, however, was the highest finisher among the four title contenders, giving him the 2019 championship and third of his career (2013 and 2014 were the others).

Crafton becomes the first NASCAR national series champion to claim the title without a race win during the season since Austin Dillon’s 2013 Xfinity Series championship.

Crafton’s championship is also the first Truck series title for a Ford driver since 2000, which was won by the since-retired Greg Biffle.

“It feels amazing. It’s one step closer to what (ron) Hornaday has done, and they called us the underdog. I heard (Todd) Bodine and everybody say I was the underdog and I didn’t have it," Crafton said. "We fought harder. I guarantee you every one of these guys worked harder and this Menard Ford F-150 was fast tonight.

"The first run I was like, ‘Oh, boy we’re in trouble.’  But we just made air-pressure adjustments from there. We made a few adjustments to tighten it up because we thought the track was going to be green it was going to go away, but this thing ran flawless all night and the motor was very good as well and everything just went our way. I was praying there, ‘I do not want a yellow right here at the end of this thing.’ ”

Asked after the early struggles, how he turned the race around, Crafton said, "I guess I finally got out of the wheelchair and got up on the wheel and got it done.  Like I said, I took a lot of criticism over the restarts and it was time to get it done now.”

The win is Hill’s fourth of the season and bookended the season in Victory Lane after winning the season opener at Daytona.

With 40 of 134 laps remaining in the race, several teams began making their final green-flag pit stop to pick up enough fuel to make it to the finish.

Moffitt and Chastain were the first title contenders to pit on Lap 97, followed by Crafton and Friesen on Lap 98.

Once the cycle of stops were completed on Lap 104, Crafton had moved into the lead followed by Eckes and Hill.

With 25 laps remaining, Crafton continued to lead while Chastain, his nearest championship rival, had moved up to fourth.

Hill got around Crafton and retook the lead on Lap 116.

Hill held off a tough challenge from Crafton to complete a sweep of the first two stages.

Chastain was third, Moffitt fourth and Friesen ended up fifth.

Following the break between Stages 1 and 2, all of the lead-lap trucks elected top pit with Moffitt the first off pit road.

On the restart on Lap 36, Moffitt was followed by Friesen, Chastain and Crafton.

Chastain wasted little time getting around Moffitt and to retake the lead after the restart.

With 20 laps remaining in the second stage, Chastain held a small advantage over Friesen while Hill moved back up to third.

On Lap 44, Hill first passed Friesen then made his way around Chastain to retake the lead in the race.

Caution was displayed on Lap 50 when Ray Ciccarelli blew the engine in his truck and dropped fluid on the track. The race returned to green on Lap 55 with Hill in the lead followed by Chastain and Crafton.

Crafton quickly powered into the second spot after the restart.

Crafton went to the outside of the Hill to claim the lead briefly only to see Hill reclaim it on Lap 58.

Hill passed Chastain off Turn 2 with one lap remaining to earn the Stage 1 victory.

Friesen started on the pole but Chastain wasted no time in grabbing the lead on Lap 1.

Moffitt moved up to the third positon on Lap 7 as Friesen closed back in on the leader.

With 20 laps remaining in the first stage, Chastain maintained a small but steady lead over Friesen as all four title contenders ran in the top-five.

Twenty laps into the race, Chastain was still able to maintain a small lead over Friesen as Moffitt had dropped to fourth.

On Lap 23, Todd Gilliland tagged the wall in Turn 2 but was able to continue on.

Hill got around Friesen into position to challenge Chastain for the lead with five laps to go.

On Lap 29, Hill went to the inside of Chastain and took the lead for the first time in the race.

Matt Crafton: 2019 Truck title was about "winning the war"