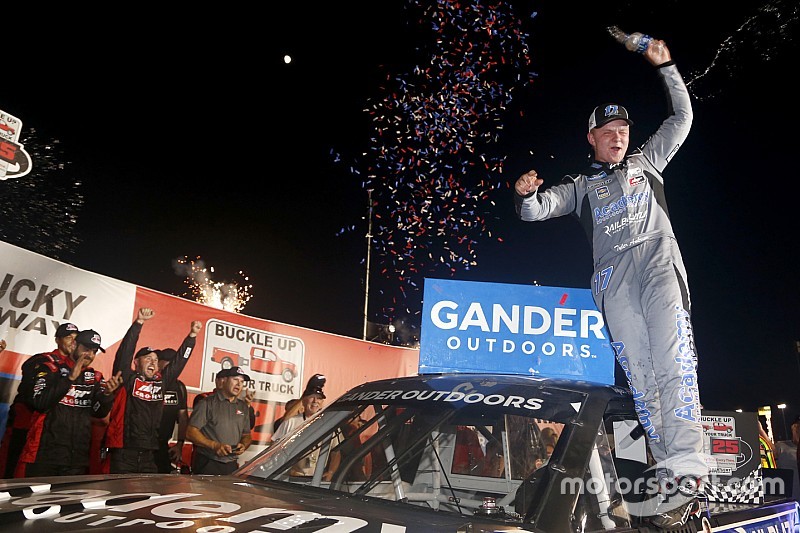 Tyler Ankrum had the one thing he needed more than anything else for his first NASCAR Truck Series victory – enough gas.

Brett Moffitt had emerged from green-flag pit stops with a large lead but was told he was two laps short on fuel. He apparently never saved any as his No. 24 Chevrolet fell off the pace with just under two of 150 laps remaining.

Ankrum, who had a longer pit stop but clearly had enough fuel because of it, moved into the lead and cruised to the victory in Thursday night’s Buckle Up 225 at Kentucky Speedway.

The win is the first of the 18-year-old’s career. He wasn’t able to run the first three races of the season because his 18th birthday wasn’t until March 6.

“Honestly, I don’t think I was listening (to my radio), I was just driving my rear end off. Holy cow, I think I held my breath the last three laps,” Ankrum said after the race. “That was awesome.

Asked what being locked in the playoffs meant to him, Ankrum said: “Hopefully it means a sponsor – holy cow! I cannot believe I just did this.

“Man, it’s going to take a lot of work. Honestly, one of my biggest faults is I’ve always doubted myself. I kind of feel like all that has washed away. I can’t thank David Gilliland and DGR-Crosley enough.

“I just don’t know what else to say.”

With 50 laps remaining, Ankrum held more than a 1.5-second lead over Ben Rhodes. They were followed by Moffitt, Burton and Lupton.

On Lap 107, Moffitt got around Ben Rhodes to take the runner-up position.

With 40 laps to go, Ankrum dropped to pit road under green to make his final stop for fuel to make it to the finish. His move triggered a round of green-flag stops.

Once the cycle of stops was complete with 26 laps to go, Moffitt emerged with a more than 4-second lead over Rhodes. However, both Moffitt and Rhodes were told they could be two laps short and needed to conserve fuel.

With 15 laps remaining, Rhodes fell off the pace while running second and dropped to it road with a flat tire.

After 155 laps, Moffitt still held a nearly 6-second lead over Ankrum with Friesen having moved up to third.

Crafton secured the Stage 2 win after a multi-truck wreck among the leaders left him out front when the race went to caution and ever returned to green-flag conditions.

Following the break between Stages 1 and 2, Grant Enfinger was the first off pit road and led the way on the restart on Lap 42. He was followed by Sheldon Creed and Todd Gilliland.

Both Johnny Sauter and Matt Crafton had to restart from the rear of the field after both were penalized for a commitment line violation while pitting.

On Lap 43, Spencer Boyd got into Natalie Decker in Turn 2 and also collected Jordan Anderson in a multi-truck wreck that brought out a caution. Johnny Sauter also caught some damage in that incident.

On the restart on Lap 53, Enfinger still led the way followed by Brandon Jones and Moffitt.

Chad Finley got loose and slammed into the Turn 4 wall on Lap 55 to bring out another caution. A handful of trucks elected to pit, including Creed, under the caution. Gilliland also pit with a possible engine issue.

Enfinger remained out front on the restart on Lap 60 followed by Jones and Harrison Burton.

A multi-truck wreck erupted shortly after the restart collecting Burton, Gus Dean, Sauter and Josh Bilicki to bring the caution back out. Jones had moved into the lead before the caution was displayed.

Jones led the way followed by Enfinger and Chastain when the race returned to green with six laps remaining in the stage.

On Lap 66, Enfinger got to the inside of Jones, got loose and ran up into him, slamming both drivers into the wall and out of contention for the race victory.

That left Crafton in the lead followed by Chastain and Lupton as the stage ended under caution.

Creed dominated the first stage, leading all 35 laps and taking the stage win by more than 2 seconds over Enfinger.

Enfinger started on the pole but Creed quickly moved into the lead after the start.

After five laps, Creed had almost a 1-second lead over Enfinger with Chastain in third, Burton fourth and Gilliland fifth.

With 20 laps remaining in the first stage, Creed’s lead over Enfinger surged to more than 2 seconds. Chastain remained in third, more than 7 seconds behind the leader.

After 25 laps, Enfinger was able to cut into Creed’s lead, knocking it down to 1.4 seconds. He was followed by Chastain, Gilliland and Burton.

On Lap 28, Gilliland got around Chastain to take the third position. Austin Hill was forced to pit under green for an apparent engine issue. Hill eventually took his truck to the garage.

Friesen had to start the race from the rear of the field after moving to a backup truck when his primary truck was confiscated by NASCAR inspectors earlier in the day.