Annett looks for strong finish in 2013 finale at Homestead

CONCORD, N.C. (November 12, 2013) - As the 2013 NASCAR Nationwide Series (NNS) season will come to an end this weekend at Homestead-Miami (Fla.) Speedway, Michael Annett and the No. 43 team will look to finish strong. 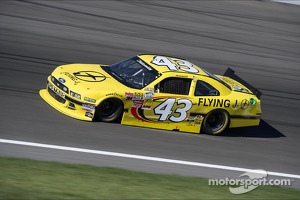 Annett has five starts at the mile-and-a-half track and earned his best finish of 12th in last year's race. The finish helped the team secure a fifth-place finish in the 2012 NNS point standings. The team, lead by Annett and Crew Chief Philippe Lopez, played on the side of caution in 2012 due to the tight points battle going into the finale. This weekend look for the team to take a more aggressive approach on the track.

The No. 43 will also debut a new partner at Homestead. Richard Petty Motorsports will announce the new partnership at the track on Friday.

Comments from the No. 43 Ford Mustang driver Michael Annett:

"Last year at this time, we were in a very different scenario. We had to be cautious because we were in a points battle and needed to be calculated in our race approach. This year, we don't have any of those risks. I feel more comfortable with our mile-and-a-half program and the cars than I did a few months ago. This is the perfect time to go out there and risk it all for the win. "2013 has been a pretty up-and-down year for me. We started off with really high expectations. The accident at Daytona was really disappointing. We worked so hard to build something good last year, and it was all taken away after one race. Even though I was out for eight races, I was ready to come back and hit the ground running. The team continued to work hard and never gave up on me throughout my healing process."

"We're going to Homestead with all guns firing and looking to finish the best we can. Last year's priority was just to keep the No. 31 in sight, and we did that, but we didn't get the finish that we thought we could've. The goals will be a lot higher this weekend. "Obviously, the start of 2013 was a bit of a disappointment with Michael getting hurt. We thought we were going to be running in the top-five in points this season, but that got held up at the blocks. With Michael coming back late, it really changed our season. We feel like we've been behind for a couple of months. We've had some good runs but definitely not the season we had last year. You'll have that with injuries, just like with stick-and-ball sports. We'll give them everything we've got in Homestead."

Trevor Bayne diagnosed with MS, will continue to race