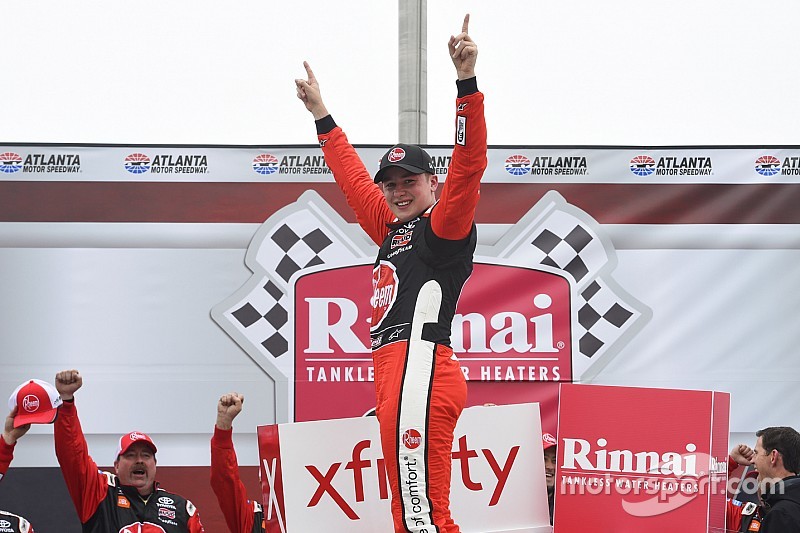 Christopher Bell didn’t have to wait long to pick up his first NASCAR Xfinity Series win of the season.

Bell and his No. 20 Joe Gibbs Racing Toyota were dominate from the start of Saturday’s Rinnai 250, winning both stages and holding off Cole Custer at the checkered flag to claim his first series win of 2019.

In his stellar seven-win season of a year ago, Bell didn’t pick up his first win until the eighth race of the season (at Richmond).

The win is the ninth of Bell’s Xfinity career.

"The top (lane) is just so good going through (Turns) 1 and 2. Even on the long run before the caution, I knew I was going to have to move up there to block (Reddick) at some point and I was just really struggling there," Bell said in Victory Lane.

"I'm just very fortunate to be able to drive this Supra. It's the first Supra win in the NASCAR Xfinity Series and it means a lot to me to be the first driver in it. The Surpa's awesome - it looks good and it's fast."

Bell said he felt a little "sloppy" as a driver at times during the race.

"Running the yellow line is so hard and I would just struggle on the longer runs there," he said. "I was knew I was going to have to move up if we didn't get the last yellow. I was pretty tickled that yellow came out so we could put some tires on."

With 50 laps remaining in the race, Bell maintained a more than 2-second lead over Reddick. Allgaier was another 2 seconds behind Reddick.

A round of green-flag pit stops began with 42 laps left with several drivers heading to pit road including Bell. During the stops, Reddick and Allgaier got off pit road ahead of Bell.

When the cycle of stops was completed on Lap 134, Bell had made his way back to the front and reclaimed the lead.

With 20 to go, Bell’s lead, which had grown to over 2 seconds over Reddick, was beginning to shrink.

On Lap 156, John Hunter Nemechek hit the wall to bring out the first caution of the race for an on-track incident. All of the lead-lap cars elected to pit for new tires.

Bell was the first off pit road followed by Earnhardt, Allgaier and Jones. Bell led the way on the restart with three laps to go.

Reddick recovered from a long pit stop to finish third, Jones was fourth and Earnhardt completed the top-five.

Following the break between the Stages 1 and 2, Bell was the first off pit road and reclaimed the race lead when Stage 2 went green on Lap 48.

With 30 laps left in the second stage, Jones had moved up to second followed by Custer, Jeffrey Earnhardt and Allgaier.

Bell built up a more than 3-second lead over Custer with 10 laps remaining in the second stage. They were followed by Jones, Earnhardt and Reddick.

With three laps to go Reddick powered into the third position.

Bell grabbed the lead on the first lap and led all 40 on his way to the Stage 1 victory over Custer.

Allgaier finished third, Reddick was fourth and Jones completed the top-five. The stage win is the first of the year for Bell.

Custer started from the pole since qualifying was rained out and the lineup was set by 2018 owner points but Bell quickly grabbed the lead on Lap 1.

With 25 laps still to go in the first stage, Bell continued to hold a sizable lead followed by Custer and Allgaier.

Bell moved out to a more than 2-second lead halfway over Custer halfway through the stage. They were followed by Allgaier, Austin Cindric and Nemechek.

With 12 laps to the end of the stage, Custer had cut Bell’s margin to under one second.

Bell held a slight advantage over Custer with five laps remaining in the stage. Allgaier was still in third, Reddick fourth and Jones was running fifth.

Stephen Leicht dropped to the rear at the start of the race due to unapproved adjustments. Chad Finchum also dropped back as a gesture of respect for the competition.