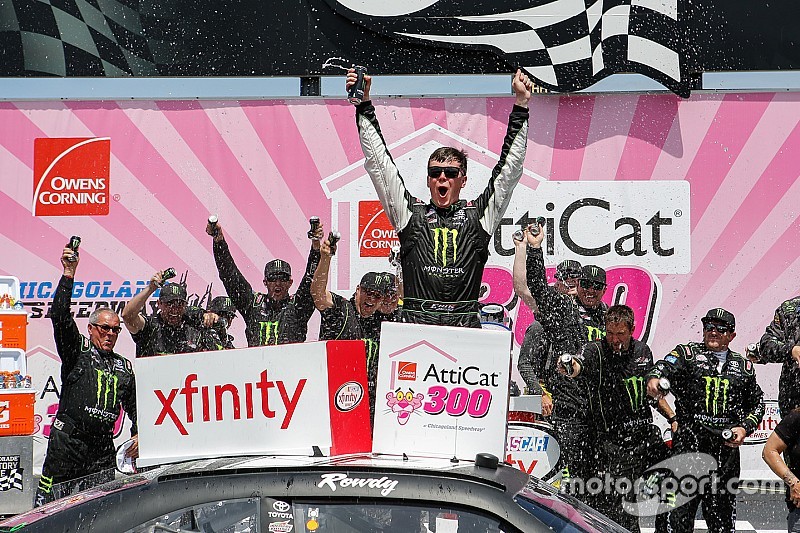 Jones also won the Camping World Truck Series race at Iowa Speedway in Newton on Friday night before traveling to Chicagoland on Saturday for the Xfinity race. He arrived in Joliet in time to qualify the No. 54 Joe Gibbs Racing Toyota that was driven by Drew Herring in practice.

"The Monster Energy Camry is just good," Jones said. "Drew Herring did a good job getting it ready."

Blaney comes up one position short

Ryan Blaney finished second after a late-race battle with Austin Dillon for the runner-up position.

Brendan Gaughan and Chris Buescher battled for hard in the closing laps with Gaughan placing fourth and Buescher fifth.

"It was an amusing day for the South Point Chevy," Gaughan said. "Our two worst runs were the first one and the last one."

Jones took the lead for the final time when he got by Blaney with 10 laps to go in the 200-lap race. Blaney and Gaughan had inherited the lead during a lap 150 caution during confusion regarding when pit road opened. A verbal cue prematurely notified teams and drivers the pits were open before flags and lights suggested such. As a result, 22 of the 33 cars still running at the time were penalized for pitting too soon.

Ross Kenseth turned a front-row starting spot into a sixth-place finish for his Xfinity Series debut, leading the first lap of the race as well.

"Overall, a great day. Starting off, we weren't very good back there in traffic, but we worked on it," Kenseth said. "I'm really thankful for this opportunity from Dollar General and Joe Gibbs Racing."

No Bull: Brennan Poole is ready to take on Chicagoland