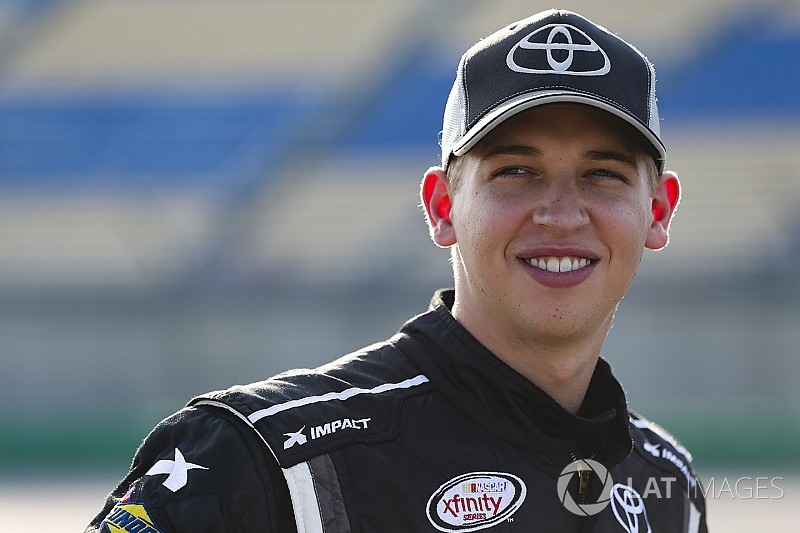 Kyle Benjamin returns to series driving for Hattori Racing Enterprises and Japanese student-led pit crew before next weekend at Iowa.

Benjamin will make his first start with car owner Shige Hattori in the K&N Pro Series next week at Iowa Speedway. It will be his first K&N Pro Series race this season since he won in his only start last year at Greenville-Pickens Speedway.

Next weekend will also be his first start in the Xfinity Series since Atlanta earlier this year for Joe Gibbs Racing.

Iowa has been a good track for Benjamin historically having won a K&N Pro Series race in 2016 and he finished second in his Xfinity start there last season.

The Easley, S.C., native is just happy to be back at the track again in equipment he knows can win races.

“I’m excited to get to go back to Iowa with this team,” said Benjamin. “They’ve proven what they can do in the truck series this year and they always been fast in the K&N Pro Series so I know we’ll have a good car.

“I’m really thankful for the opportunity and it’s going to help me for the Xfinity Series race as well.”

Benjamin, a former NASCAR Next driver, has made 33 K&N Pro Series starts during his career with five wins, six poles and 19 top-10 finishes and is looking forward to returning to a track he won at in 2016.

“I’m just excited to get back in a car I know can win races and finally get the chance to get back on the track,” said Benjamin. “I haven’t been out for a long time (in the seat) so I should be able to knock the rust off if there is much rust at all.”

Hattori is happy to have a driver like Benjamin in his car next week in Iowa.

"Kyle hasn't gotten many opportunities, but when he has been in a fast car, he's run well,” said Hattori. “He finished second in the truck race at Martinsville when we finished third with Brett (Moffitt), and that was impressive. He has some XFINITY experience that he brings to the table and deserves another chance to be in fast equipment.

“It would be great to go and win the race. That would be a great experience for the students to enjoy, as well as our partners involved with this program, especially Yazaki and Hino.”

The 20 year-old driver will also have a unique pit crew with him for the Xfinity race as he’ll have six students from Japan help prepare the K&N car. They are in the United States for two weeks to learn about NASCAR.

HRE is hosting six students and three instructors from Toyota Technical College in Japan. The students will work in the race shop and receive instruction each day at NASCAR Technical Institute in Mooresville, N.C. Their two-week program will culminate with the race at Iowa where the students will work on the car during practice and go over the wall at the halfway break and perform a live pit stop.

Benjamin also makes his seventh start in the Xfinity Series for Joe Gibbs Racing where he’s already enjoyed some success. He’s already captured a pair of pole awards and a two top-five runs highlighted by a runner-up finish at Iowa last season.

Benjamin is like many drivers out there looking for a regular ride and it’s been almost five months since he’s driven in a race.

“I really appreciate the fans who stay in touch with me and it’s sometimes hard for them to follow when you are out of the car for a while and I want to thank them for staying in touch with me,” he said.