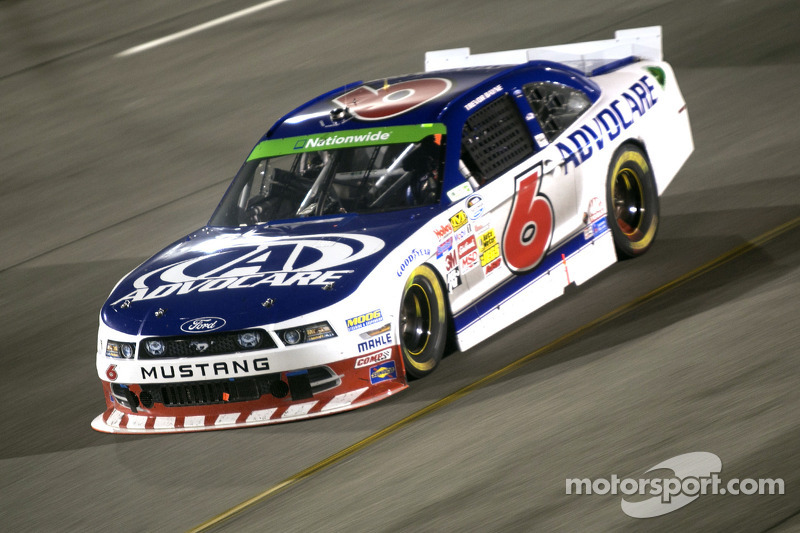 Trevor Bayne, driver of the No. 6 AdvoCare Ford Mustang earned his seventh top-10 finish of the 2014 NASCAR Nationwide Series (NNS) season on Saturday afternoon at Talladega Superspeedway, after coming home with a 10th-place finish. However, the result did not come easy for Bayne and the No. 6 team, as damage sustained in a Lap 61 incident forced the team to pit numerous times in order to make repairs.

“We had to really battle today,” said Bayne after the race. “We had such a fast car at the beginning of the race and were really just biding our time there when we damaged the car. I just really want to thank all of my guys for the work they put in to getting this car back out on the track. It’s pretty awesome to get a top-10 finish with a car that looks like it was in a demolition derby.”

Bayne began the 312-mile NNS event from 21st, and wasted little time maneuvering his way towards to front. The driver of the AdvoCare Ford Mustang improved 13 positions in the early stages, running as high as seventh prior to the first caution of the race for debris on Lap 27. After pitting for four tires and fuel, Bayne returned to the track in 12th and was able to utilize the draft from the outside line to move into the top-five for the first time on Lap 40.

Bayne would remain inside the top-five until a strategy call for fuel only by crew chief Chad Norris during the second caution period of the afternoon advanced the AdvoCare Ford into the top-three. On the ensuing restart, Bayne worked both the middle and outside lanes, while trying to protect his position among the leaders. He would maintain his position on-track until a Lap 61 incident forced Bayne to pit road for extensive repairs. After coming onto pit road five separate times while under caution, Norris and crew kept Bayne on the lead lap and sent him back out onto the track in 23rd.

Despite issues with both the handling and the steering, Bayne was able to work his way up to 13th before a Lap 83 caution gave his crew an opportunity to further repair his Ford Mustang. Upon returning to the track, Bayne began to experience a problem with the front-end of his car, ultimately leading to a flat left-front tire. The flat-tire caused Bayne to return to pit road for repairs and cost him two laps to the race leaders.

Demonstrating a “Never Give Up” attitude, Bayne came back out onto the track in 24th and not only received the “Lucky Dog” free pass once, but twice, to return to the lead lap in the closing stages as the caution flag flew for two multi-car accidents.

With the laps winding down, Bayne took the green flag for the final time from 17th and immediately began to charge towards the front. In the end, Bayne was able to improve seven positions in the final three laps and bring the No. 6 AdvoCare Ford Mustang home with a 10th-place finish.