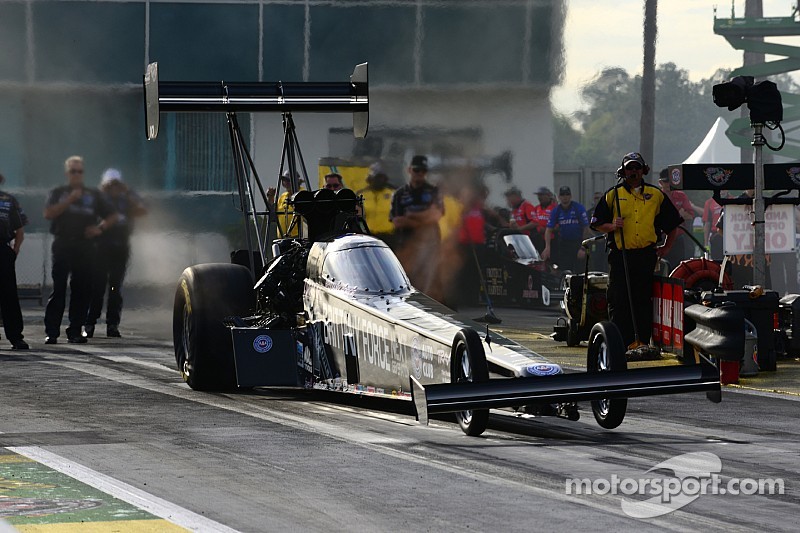 LAS VEGAS – With two consistent runs on Friday at The Strip at Las Vegas Motor Speedway John Force has his eyes on a move up the point standings with one more day of qualifying at the 16th annual SummitRacing.com NHRA Nationals. Force driving the white Chevrolet Camaro SS Funny Car for the second race in a row posted the second quickest time of the first qualifying session, 4.109 seconds, and stepped up on the second session with a stout 4.087 second pass.

Force picked up two qualifying bonus points and also gained some valuable information going into the second day of qualifying. With a new team led by crew chief Jon Schaffer Force is encouraged hard work is starting to pay off for his Funny Car team.

“We are building a new team and we knew it would take time to come together. I feel like I am the quarterback of this team and we will be successful. We are rebuilding and I am doing that with young guys that have a lot of energy and will be with this team for many years to come,” said Force, the 141-time Funny Car winner.

“I have to build for the future for my sponsors like Peak, Auto Club, Chevrolet, Traxxas, Lucas Oil and Mac Tools. Right my team is starting to make the call and get really consistent. We have been testing a lot and I told my guys I will give you everything I have. We are going to fight our way to the top. Runs like today make a big difference and we will go get them tomorrow.”

The Auto Club of Southern California Chevrolet Camaro SS and Robert Hight improved in the second round of qualifying as well running 4.091 seconds at 314.97 mph in the right lane. In the first session Hight’s early numbers were some of the quickest in the session but the 2014 SummitRacing.com NHRA Nationals finalist didn’t have the power at the top end.

Crew Chief Mike Neff is working his way to a solid race day tune-up and the team is focused on continued improvement tomorrow.

“Our goal for this weekend hasn’t changed. We are working to get a consistent tune-up that will win us rounds on Sunday. The conditions were definitely better in the second session and we stepped up. We are being systematic so we don’t waste qualifying runs with tire smoke. We have a lot of data from last season and we got some good info today. I am looking forward to running quicker with this Auto Club Chevy Camaro tomorrow,” said Robert Hight, a three-time SummitRacing.com Nationals winner.

Courtney Force did not run well enough to make it into the top twelve by the end of the day Friday. She made two runs which left her in the No. 14 spot with a 4.190 ET at 289.57 mph and will start over with a clean slate on Saturday. She and the entire 16-car Funny Car field will have two additional sessions to settle into their positions for race day.

“We ran a 4.19 in Q1. We had a hole out down track so it slowed our car down a little. We were in the show in the No. 6 spot after that run and came out looking to improve in Q2. We got down there and spun the tires. We lost out on that run. There are a lot of other good cars out here that went around us so we didn’t make the show today, but we’re looking to get this Traxxas Chevrolet Camaro SS down the track and well into the top half tomorrow,” said Force.

Force has never qualified lower than No. 6 at The Strip at Las Vegas Motor Speedway and currently holds the track speed record at 325.27 mph, her career-best.

Brittany Force and the JFR Top Fuel dragster stepped up mightily in the second session as well running 3.801 at 310.77 mph. She held onto the No. 2 qualifying spot for a few pairs in the session before slipping to the No. 7 spot at the end of the session. The third year driver was excited about the second run since it gave her team some momentum going into Saturday.

“It feels good to come out and to be able to run a 3.80. We could have run better but I lifted early. I was feeling something down track and for me I will always play it safe. I don’t want to hurt this JFR Top Fuel dragster. This team put together a fast race car and I am looking forward to improving our ET tomorrow.”