The first of the Top 20 Moments of 2012 selected by Motorsport.com staff goes to Allen Johnson who landed his first NHRA Pro Stock championship. It was a remarkable season for the Johnson & Johnson Racing team.

After the next to last NHRA Full Throttle Drag Racing Series event at Las Vegas, all Allen Johnson needed to do to claim his first Pro Stock title was qualify for the World Finals on the Auto Club Raceway at Pomona dragstrip. He had 126 points in hand over 2011 champ Jason Line, and Johnson took the bit between his teeth to earn his first career championship - after 17 years of trying.

The best Johnson & Johnson Racing had done before this year was fourth in the season standings - in 2007 and 2011 - but as Allen told me, "This year we learned, as a team, how to win. Who knew it would take 17 years?" 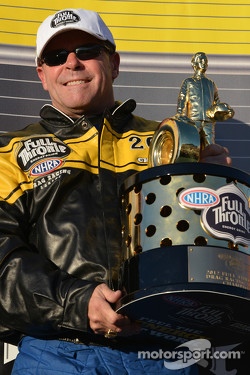 With Mopar engine power built by his father Roy, whose heart attack in 2007 nearly ended the family's quest for a Pro Stock title, Allen Johnson romped to seven victories and 10 No. 1 qualifying spots this year, no win sweeter than the final one on the last day of the season.

When I asked Allen to tell me his top moment of the year, he said it was clutching that big trophy. He also told me how his team turned their fortunes around: "Through the first part of the season we worked on problems and when it got about mid-year, we were just so consistent and we eliminated those mistakes. By Countdown (6-race playoff) time we were really on the points and just really learned from what you do wrong and don't do it again."

Allen and Roy Johnson brought Dodge its first NHRA Pro Stock championship since 1994, joining Roger Penske in giving the brand two major racing titles in one season. And the rest of the Pro Stock paddock ought to be hesitant in calling this first-timer a one-shot wonder as he's got a technical partnership with four-time class winner Jeg Coughlin in 2013. Talk about formidable!