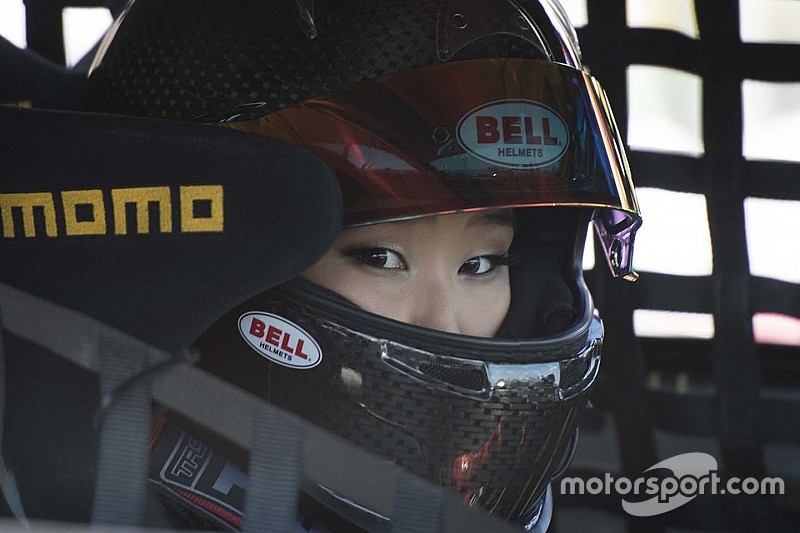 She was determined to achieve the same if not better results this year in her new STR/GPI #38 Honda Civic Si...

Tooele (UT) – Rounds 9 and 10 of the 2016 Pirelli World Challenge were held at Utah Motorsports Campus, formerly known as Miller Motorsports Park, under a hot scotching sun accompanied by breezy winds. This was Samantha Tan’s second visit at this track where she had posted a fourth place finish and two sixth places last season. She was determined to achieve the same if not better results this year in her new STR/GPI #38 Honda Civic Si.

The track configuration that Tan raced on, known as the outer course, has 15 turns that stretches over 3.3 miles. Friday morning’s practice session started off with a cool breezy condition. Her best time in the official practice was 2:20.247, which was the 15th best time. During the first session, the car suffered a suspension failure, which was quickly repaired, but altered the handling with which Samantha was gong to struggle all weekend. “The car just did not feel the same after that. I do not know exactly how to explain it. On paper, the repair was successful, but the car just understeered a lot and did not allow me to put any power down.”

During the qualifying session, Tan clocked a time of 2:20.183, which put her in 15th place on the grid. On a track with 15 turns and dominated mostly by Mazda Miatas, it is safe to say that her game on the track would be challenging. Race 1 began with a rolling start, with the safety car leading the TC class, followed by the TCA and TCB classes. She had a very good start and gained a position on the first lap, but then the race was interrupted with a full course yellow and the safety car deployed due to a TCB car that went off the track and flipped over. By the end of the race she was able to move up two more positions and finished the race in 12th position.

Race 2 launched on Saturday afternoon with Tan in 12th place for the standing start. She kept her position on the start, but came out in 16th place after the first turn. “It was a big mess in the first turn, and I was forced out to the outside. I knew I really needed a good finishing position to accumulate point towards the championship so I chose to be conservative, rather than take an unnecessary chance.” A crash and full course yellow interrupted the race 25 minutes in and the safety car was deployed once again. Unfortunately, Samantha was trapped in a group of TC cars until the race was restarted with only one lap to go.

The whole TCA group was able to put a lap on her during that time. Her chances to improve her position evaporated and she had to settle for a 16th place finish. “All in all, a very challenging weekend, to say the least. I am looking forward to the next races in Laguna Seca in October, as I do have a chance to move up in the points standings.” Laguna Seca will be worth double points, as Samantha missed the Lime Rock races earlier in the year. She is presently 7th in the TCA class, with a good chance at finishing 4th. “My goal at the beginning of the year was to finish in the top 5 and it looks like I can still make it.”

Round 11 and 12 will take place on October 7-9 at Mazda Raceway Laguna Seca, in Salinas, California. TC-TCA-TCB races from Utah Motorsports Campus will be aired on CBS Sports Network on Sunday, August 21st, 2016 at 04:00PM ET.