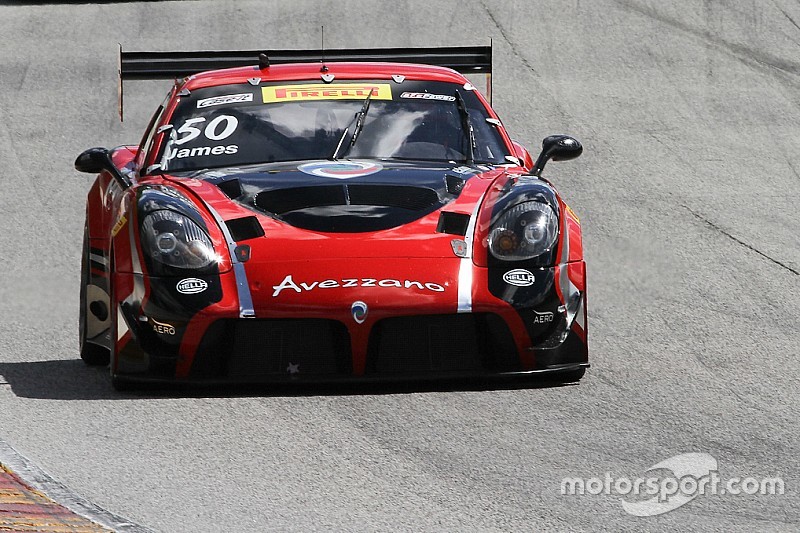 Ian James drove a controlled and error-free race in the Panoz Avezzano at Utah Motorsports Campus to clinch victory, but there was frantic action and bent metal behind him.

Jeff Courtney’s Maserati Gran Turismo, on pole thanks to setting the fastest lap in yesterday’s race, got swallowed up from the standing start, allowing James to slot the Panoz Avezzano into the lead, ahead of George Kurtz’s GMG Racing McLaren 570S.

However, contact between Jason Bell’s SIN R1 and Tony Gaples’ Chevrolet Camaro brought out the yellow.

Stacy tried to get around Courtney’s Maserati on Lap 6, but his trip off-line allowed local boy Stavely to move his Ginetta up to fourth. Two laps later, Stacy was up to third, as he took full advantage of Stavely’s successful attempts to muscle past Courtney.

Just a few car lengths ahead, James reestablished himself at the front, as Kurtz generously gave some room into a tight left-hander. A few lengths behind, Baptista elbowed his way of Aschenbach’s Camaro.

At the end of that lap, Stacy ran wide onto the front straight and that allowed Stavely into third, and further around Lap 10, Stavely passed Kurtz’s McLaren for second.

Baptista, without a Camaro filling his view through the windshield, closed right up on Courtney who was still trying to separate Stacy from fourth. The Maserati got ahead on Lap 12, but then immediately ran wide, allowing both FLM Caymans ahead.

At the halfway point of the 50-minute race, third-placed Kurtz was now bottling up his followers – except when they hit the straights – and had fallen five seconds behind Stavely, who was piling on the pressure on leader James.

The stalemate in the top six broke with 12 minutes to go, when Courtney and Baptista came together at Turn 11. The Maserati got going again in eighth, but Baptista’s rear wheels bogged down in the sand and gravel. That boosted Aschenbach’s Camaro into fifth, and Keith Jensen’s Am Cayman into sixth, as Baptista lost a lap and trailed into the pits.

On the restart with six minutes to go, James had to get very protective of his inside line, as Kurtz tried to make a brave move from third, but the leader held sway and Stavely’s Ginetta swept across from the outside to reclaim second. Meanwhile, Aschenbach tried to demote Stacy’s Porsche, but left himself vulnerable to Jensen. The pair ran alongside each other for several corners, until Jensen struck the Camaro and spun himself.

The delay for Aschenbach allowed Stacy to fully focus on trying to grab third from Kurtz’s McLaren but the British car’s straightline speed kept it out of reach of the German one until on the final turn of the final lap, Kurtz made a slight slip wide, and Stacy was through. The margin at the line was 0.097sec, but Kurtz could at least be satisfied with his seventh win in the Amateur category.

Meanwhile at the front, the Panoz had the legs on the better-handling Ginetta in the closing laps, and James scored the Avezzano’s fourth victory by 0.588sec, the pair of them 3.8sec clear over the titanic scrap for third.

Aschenbach held on to score fifth in Blackdog Speed Shop’s Camaro, ahead of Frank Gannett in another Lacy Racing Ginetta.

Martin Barkey never recovered from an early spin in his KTM Xbow and came home 11th.