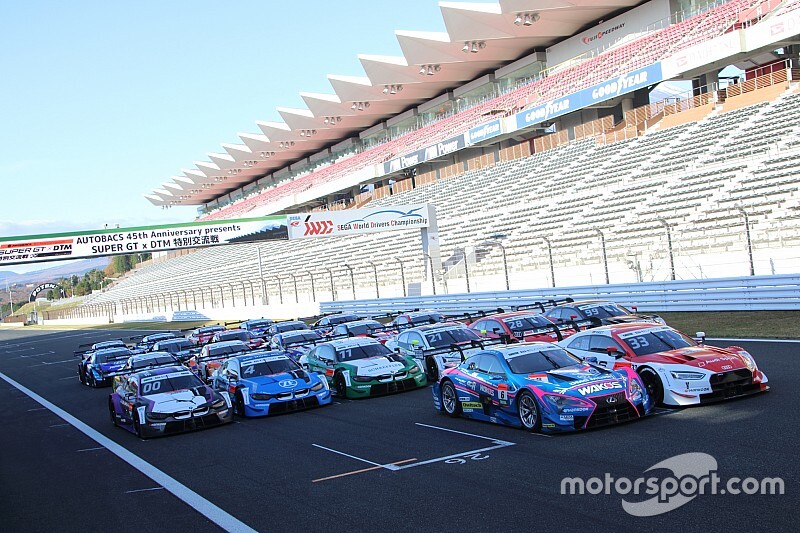 While the incident was not captured by live coverage, Treluyer's WRT Audi stopped facing the wrong way on the run to the fast Coca Cola left-hander.

When the session resumed in the final minutes, Makino set a 1m30.421s lap that stood as the best time, 0.227s clear of 2019 Super GT champion Kenta Yamashita in the #6 Team LeMans Lexus entry.

That left Duval in third, just over two tenths off the Lexus, as the Audi driver led the DTM field in both sessions, placing eighth in the morning's running and seven tenths off the leading pace.

The first session's benchmark was set by Ryo Hirakawa as the #37 TOM'S Lexus driver demonstrated the experience of the DTM's Hankook tyres that he used at Hockenheim last month.

While Rast was eighth in the morning's running, he placed 11th in the afternoon.

BMW's Kamui Kobayashi and Alex Zanardi both got their first experience of a 2019-spec M4 DTM and could only place 16th and 22nd respectively in the morning.

Zanardi would remain last in the afternoon, with Kobayashi down in 19th ahead of Rockenfeller.

While the joint racing between the DTM and Super GT at Hockenheim ultimately did not use Balance of Performance, it is being considered at Fuji and Motorsport.com understands its use will be continually reviewed during the weekend.

The threat of rain for both Saturday and Sunday's race would likely eliminate the need for BoP as it is expected to favour the DTM machines that have significantly less aerodynamics compared to the Super GT cars.

The testing period also included a practice Indianapolis-style restart for the DTM drivers to practice ahead of its use in the racing.

The Super GT teams will return to the track later this afternoon for their second tyre test of the Hankook compounds.