B-Max director Toshikazu Tanaka has hailed Frederic Makowiecki after the Frenchman delivered an impressive wet-weather drive at Sugo to secure Nissan’s first SUPER GT victory in over a year.

As the weather conditions worsened in the second half of the race, Makowiecki excelled behind the wheel of B-Max's Michelin-shod Nissan GT-R after taking over from Kohei Hirate, charging through the pack from fifth to take the lead on lap 54 of 81.

Their win ended a barren spell for Nissan dating back to the Fuji 500k round in 2018, and also marked Makowiecki’s first GT500 victory since he drove for Honda in 2014.

Tanaka, whose B-Max operation stepped up to the top class of SUPER GT last year, said he put faith in Makowiecki for the tricky second stint based on his previous performances.

“Today's race was ‘showtime’ for Fred, who ran the second stint,” he said. “He was very confident, I think he was in the zone. He knows how to use wet tyres is smart in the race, so we made him in charge of the second half of the race.

“He did not run too well in the August Sugo official test. In that sense, he started from almost zero, but he came here with as much preparation as possible.

“He didn't have much experience with new tyres, so he made a little mistake [in qualifying] and dropped down the order. But he showed me a strong run to cancel out the frustration that had accumulated.

"In those conditions, he showed his true value. Because he has competed in several races including Le Mans 24 Hours, he drove well even when the conditions were changing.”

Makowiecki returned to SUPER GT after a four-year absence in 2019, drafted by Nissan as part of a major reshuffle of its GT500 programme.

The 38-year-old believes his B-Max team has been benefiting from NISMO’s overhaul for some time, but said it wasn’t until Sugo where it was able to deliver on its potential.

“Since [the last] three races we were competitive, but small details [meant] that we couldn’t show a result,” he said. “It was very frustrating and for sure GT500 is very high level, very difficult to get a podium or a win. That’s why you need to be perfect.

“This race I think we showed the real potential of the package, Nissan plus Michelin. It’s very strong in the rain. We were already [strong] in Okayama and Fuji round 2, those tracks we were really competitive."

He added: “This year was a new project, it was not an easy end to the year for Nissan and Michelin last year. They wanted to define a new philosophy for this year.

“For sure for us this project was quite tough because we had a lot of change, a lot of people change also in the team, two new drivers, also new structure with new people from NISMO.

From that you always need to learn all together and to be ready we knew it would be six months, half a year, [and] it was the case. But as I mentioned before it was difficult because we couldn’t prove our true competitiveness."

Hirate was another new Nissan recruit in 2019, the 2016 GT500 champion being poached from the Toyota camp to join Makowiecki at an all-new B-Max line-up.

The Japanese driver rose to third early on after starting seventh, but a late pitstop meant that Makowiecki slipped to fifth by the time a mid-race safety car was deployed.

“I’m obviously very happy, having joined Nissan [this year] and today having won this race,” Hirate said. “Since Fuji we’ve had the speed, we were just looking for the opportunity for the last three races, we weren't able to show our skills.

“But Michelin and Nissan did a really good job and frankly everything came together and we got the opportunity today.

“Today the aim was to get the podium and we kind of not expected to have the win. But it’s the first GT-R this year to get the win, so we are very happy for that. Also for our team, it’s the first time we’ve won GT500. So we are really happy.

“My stint, we went out in the inter tyres. I think it was the best solution. The pace was good for me. I was able to give Frederic advice on how the conditions were. And I really think everyone together did a great job.” 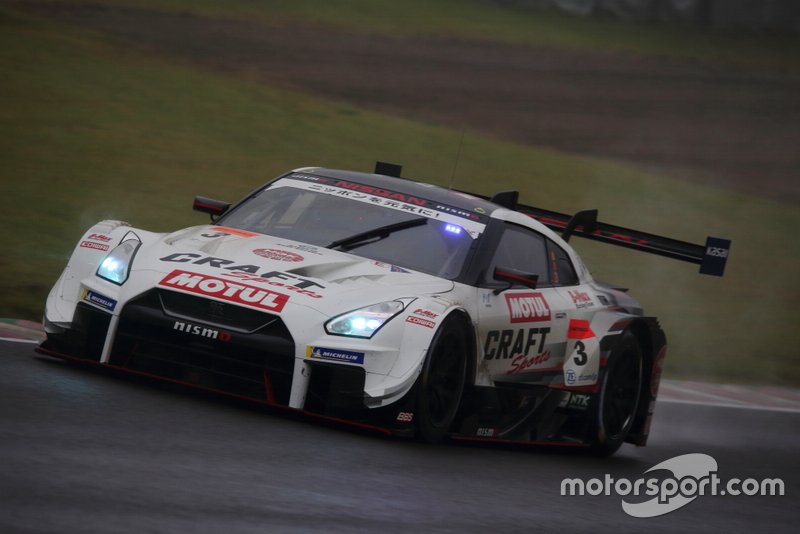 The race that ended Button and Yamamoto's title defence