Tachikawa and Ishiura's route to a first pole in two years was far from straightforward, as Ishiura was initially knocked out in Q1 after setting only the 10th-fastest time of the session at the wheel of the #38 Toyota GR Supra.

However, both the #3 NDDP/B-Max and #23 NISMO Nissans, which finished seventh and ninth respectively, lost their best laps that were set under yellow flags, after Ukyo Sasahara had spun into the Turn 11 gravel in the Mugen Honda.

Conditions had worsened between Q1 and Q2, with all eight cars initially venturing out on slicks before swiftly returning for wet tyres during the 10-minute pole shootout.

Tachikawa was the last to do so in the #38 Supra, but this didn't stop him from posting a best lap of 1m43.878s with around 30 seconds left on the clock.

It emerged that Tachikawa had made contact with the #19 Bandoh Toyota of Yuji Kunimoto at Turn 11, sending the latter wide, on his best lap, but the three-time GT500 champion escaped with a black-and-white flag for the incident.

Joining the #38 Toyota (which is carrying only 24kg of success ballast this weekend) on the front row is the #17 Real Racing Honda NSX-GT of Koudai Tsukakoshi and Bertrand Baguette, with Tsukakoshi falling only 0.201s short of pole in Q2 despite carrying a 46kg handicap.

Third-fastest was the ARTA Honda of Nirei Fukuzumi, which is one of the lightest cars in the GT500 field with only 8kg of ballast, followed by the SARD Toyota of Yuichi Nakayama (34kg) and the Suzuka pole-winning Nakajima Honda of Takuya Izawa (18kg).

Completing the Q2 order were the #100 Kunimitsu Honda of Tadasuke Makino (52kg), the Mugen Honda of Hideki Mutoh and Kunimoto in the Bandoh Supra - which had set the pace in practice and then Q1 in the hands of Ritomo Miyata. 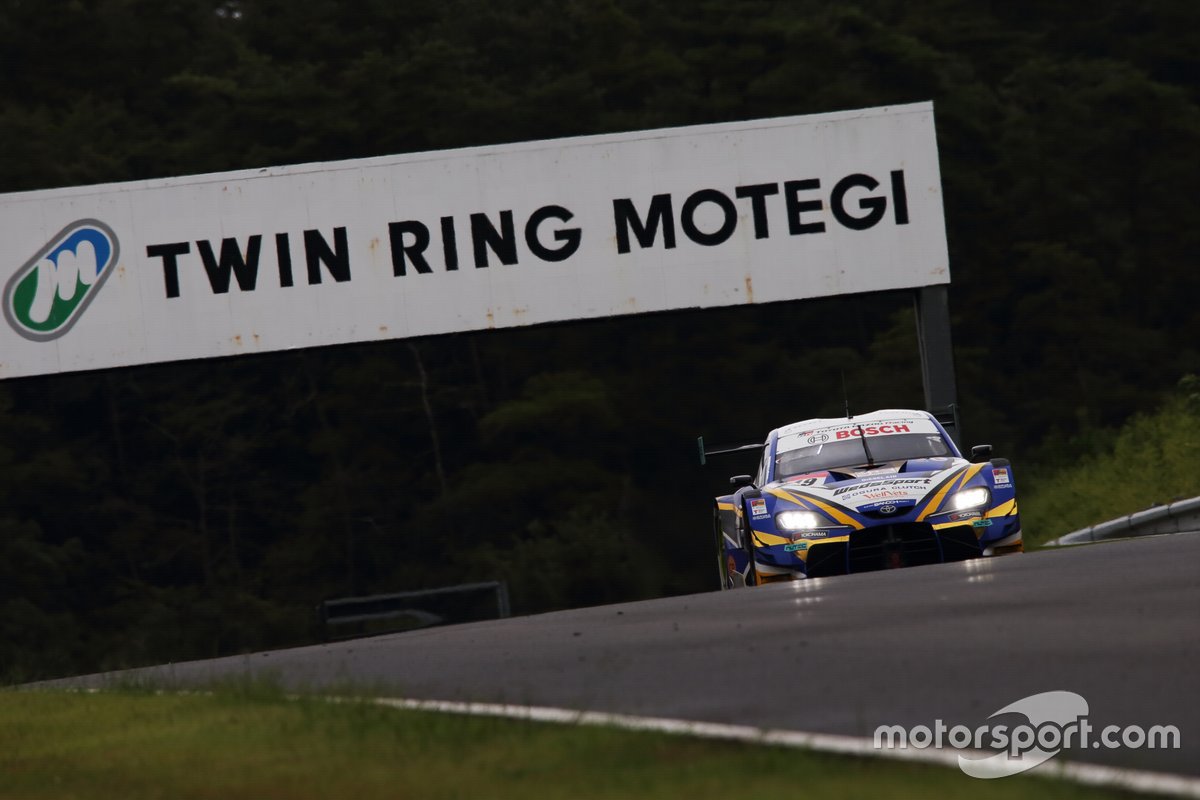 The #24 Kondo Racing Nissan also lost its fastest lap and was demoted to last behind the two TOM'S Toyotas - carrying the largest handicaps in the field at 66kg and 82kg.

Pole in the GT300 class went to the #360 Tomei Sports Nissan GT-R NISMO GT3 of Takayuki Aoki and Yusaku Shibata.

On a rapidly drying track, SUPER GT veteran Aoki set the quickest time of 1m48.546s to grab his first pole since 2009 by a massive margin of 0.902s over Kimiya Sato in the #25 Tsuchiya Engineering Porsche 911 GT3 R.

Third went to the Suzuka pole-sitting #31 apr Toyota Prius GR Sport PHV with Yuhki Nakayama at the wheel, followed by the factory #61 R&D Sport Subaru BRZ, which is carrying 69kg of ballast this weekend.

The other title-contending cars had sessions to forget, with the points-leading #11 Gainer Nissan struggling to 12th place, saddled with the maximum 100kg handicap.

Faring even worse were the #52 Saitama Toyopet Toyota GR Supra GT300 that won the Fuji opener (75kg), which was knocked out in Q1 and will start 23rd, and the Kondo Racing Nissan (48kg) which will line up 28th.

Masataka Yanagida meanwhile put the #2 Cars Tokai Dream28 Lotus Evora MC in the gravel, causing a red flag and consigning himself and Hiroki Katoh to the back of the grid.