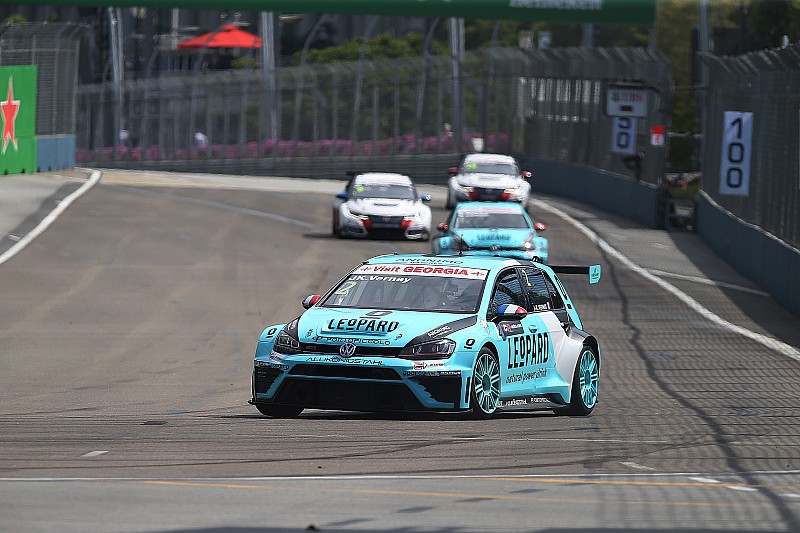 Leopard Racing's Jean-Karl Vernay has bagged his third TCR International Series victory in the opening race of the Singapore round.

Leading from start to finish in the first race of the round held in support of the Singapore GP, Vernay led a 1-2 with teammate Stefano Comini.

Comini started in third behind Mat'o Homola, who had inherited a front row spot after a plethora of track limits-related penalties in qualifying.

But the Slovakian was slow off the line, picked off not only by Comini, but by Craft-Bamboo duo Pepe Oriola and James Nash - although Homola did subsequently manage to re-pass Nash later in the lap.

While Vernay had dominated the weekend up to that point, he had to withstand a serious challenge from Comini in the early going, before settling into a rhythm and checking out at the helm of the race.

He eventually finished 3.1s in the clear.

Oriola went on to complete the podium, before being involved in a strange incident with Comini after the chequered flag, as the reigning champion moved over on Oriola and the two cars made contact.

Nash had to do with fifth, behind Homola and ahead of another Craft-Bamboo car of Sergey Afanasyev, which means the Brit now sits level with Comini at the top of the standings - with Oriola just one point adrift.

The top 10 was made up by Dusan Borkovic, 2015 Singapore race winner Kevin Gleason, Attila Tassi and Gianni Morbidelli, who had been tapped into a spin by Borkovic at the start.

In what was a relatively calm race, two late incidents threatened to interrupt the proceedings, as first Douglas Khoo and then Loris Hezemans went lightly into the barrier at Turn 7.