Boris Said has been assessed penalties and fines after statements made during Round 2 of the Trans-Am Series at Long Beach.

LANSING, Mich. -- Boris Said, driver of the No. 33 ACS Express Racing Ford Mustang, has been assessed penalties and fines after statements made during Round 2 of the Trans-Am Series for the BFGoodrich Tires Cup in Long Beach, Calif. April 11-13. 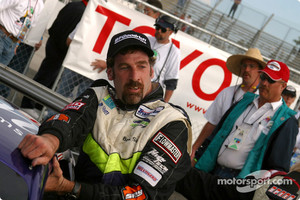 Said was fined $7,500 and his Trans-Am Series competition privileges have been suspended for 45 days, beginning May 1. Additionally, a $3,000 fine that was suspended from an infraction earlier this season was placed in force.

Said was penalized for the following, all of which happened during the Toyota Grand Prix of Long Beach: multiple negative comments made in public, including those made to a high-ranking race circuit official, that the Series was "out to get him and ruin his career;" and additional comments made by Said to credentialed media on at least three occasions that continued his attack and referred to the Series as "the Gestapo" and compared Paul Gentilozzi and his sons to Saddam Hussein and his sons.

"These statements went well beyond the bounds of common decency and good sportsmanship," said Trans-Am Series Chief Steward Terry Dale. "Boris is an immensely talented racer, and our defending champion, but he simply crossed the line while he was on probationary status. Said's repeated inappropriate comments are becoming a habit--one that we will not tolerate.

"Boris' most recent actions are a very serious contravention of the Trans-Am Series rules, particularly given his previous conduct as a Trans-Am Series competitor," added Dale. "In the past, including earlier this year, Boris has been placed on probation and/or fined for his actions, which included unsportsmanlike behavior, public criticism of the Series and officials and the use of inappropriate, objectionable and profane language. Unfortunately, the punitive action taken against Boris to date has proven to be unsuccessful in altering his conduct. As a result, I saw no other option but to assess the current penalties."

The earlier penalties arose, in part, out of conversations between Said and several Series officials relative to the aerodynamics of the Ford Mustang body. The Series has undertaken wind tunnel tests, at significant cost to the Series, to ensure parity among its major marques, which includes the Mustang.

"These penalties have never been about aerodynamics, but about Boris' unprofessional and inappropriate attitude, behavior and comments about the Series and its officials," said Series Executive Director John Clagett. "The Ford Mustang body was wind-tunnel tested twice this season. It was determined at the first test that it was down on front downforce. Therefore teams running the Mustang were given the option to run add-on front dive planes at St. Petersburg and Long Beach, in order to ensure parity. Recently, a new Mustang hood panel and nose were tested in the wind tunnel and approved. This new setup allows the Mustang to remain competitive with the other major marques, after the removal of the add-on dive planes.

"The Mustang has yet to be at a competitive disadvantage, as evidenced by Boris' runner-up finish in the season opener at St. Petersburg after starting last, and by his victory at Long Beach," added Clagett. "Our goal from the beginning was to achieve parity among the marques, and that parity has existed from the very first race of the season."