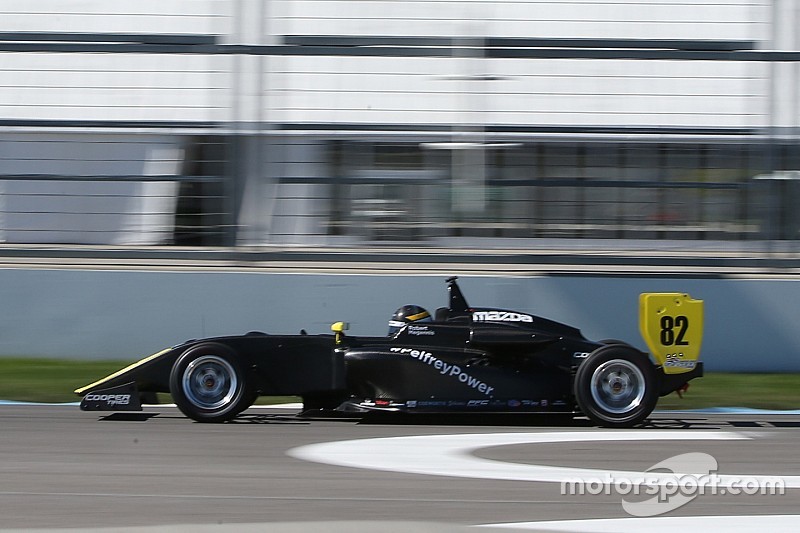 The new spec Tatuus USF-17 has been described as “tons of fun” by Robert Megennis who lapped the Indianapolis Motor Speedway road course almost a full second under the official track record in testing.

Nine USF2000 teams took part in Mazda Road To Indy’s now-traditional Chris Griffis Memorial Test on Saturday, held in the fall each year for the Indy Lights, Pro Mazda and USF2000 series. Four sessions were held today for each of the three series and the qualifying lap record held by 2016 USF2000 champion Anthony Martin – a 1min26.1053sec (101.973mph) – was soon broken.

Matthew Brabham, the 2012 USF2000 champion, was invited to shake down the car for defending champion team Cape Motorsports with Wayne Taylor Racing, dipped beneath the old benchmark early in the third of four sessions, only to be eclipsed by 15-year-old phenom Neil Verhagen, who recently clinched both the F1600 Championship Series and the SCCA Formula F National Championship. Verhagen, driving for Pabst Racing, ended the session fastest at 1:25.5962 (102.579 mph).

Lap times continued to tumble in the final session of the day with 2016 Rookie of the Year Robert Megennis eventually topping the charts for Team Pelfrey with a best lap of 1:25.3194 (102.912 mph). Brabham ended the day a scant 0.0589 second slower, with Verhagen, Dakota Dickerson (also Pabst), Kaylen Frederick (Pelfrey) and Brendon Leitch (Newman Wachs Racing) rounding out the top six.

Megennis commented: “I am loving the new car. You have paddle shifters, bigger tires, bigger brakes – it is just overall more fun to drive. It is nicer to be in – it’s bigger and it’s cooler looking. The racing is going to be great.

“We have a lot less aero than this year so we’ll be able to run closer together. It should be tons of fun.”

“I think it is a big improvement over the old car and it is definitely going to bridge the gap for the younger guys stepping up into an open-wheel car with wings and slicks better than the old car did. It drives and handles a little bit more like a go-kart and it kind of slides and has that car control aspect similar to a Formula Ford so I think it’s fantastic for teaching young drivers.

“The aero wash is almost completely gone. I was behind a couple of guys out there and I tucked up right underneath their rear wing and went through a couple of those quick corners and there was almost no aero wash so I think the racing will be a lot closer next year.”

“This is obviously a huge departure from the old design, but it’s better in every respect. The playing field is also being reset here. I think it is going to be great for all of the teams and for the series and hopefully produce some great racing.”