Reynolds breaks through on the Gold Coast 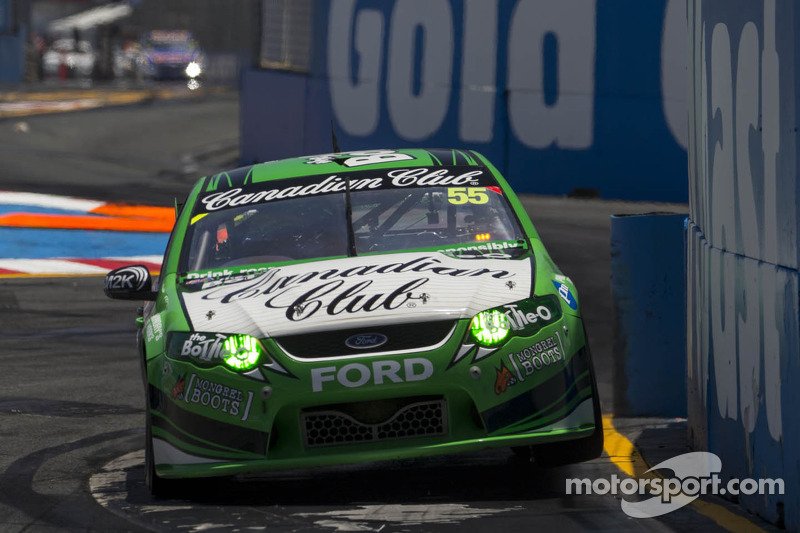 Wild child David Reynolds won the ARMOR ALL Gold Coast 600 with a drive worthy of a veteran, his first race victory on one of V8 Supercars biggest stages.

With co-driver Dean Canto, The Bottle-O racer Reynolds has been in winning positions in the past but not completed for one reason or another. This time the cards fell his way as he became the 16th different winner this year.

The podium was this time not made up of the Championship front-runners with Reynolds holding out Lockwood Racing's Fabian Coulthard (Luke Youlden) and veteran stager Russell Ingall back on the podium with Aussie IndyCar ace Ryan Briscoe for Supercheap Auto.

The result again tipped the Championship into the balance with Craig Lowndes, who won the inaugural PIRTEK CUP with Warren Luff, now holding a slender six-point lead over Jamie Whincup. Pepsi Max Crew racing's Mark Winterbottom is 98 points behind with team-mate Will Davison 121.

But the day belonged to Reynolds having started in the car, and battled hard up the front with the #22 Holden Racing Team Commodore of James Courtney/Greg Murphy, which led the majority of the race and looked on for a strong result after the car was rebuilt overnight after a collision yesterday.

But it wasn't to be for the pair who was the hard luck story of the endurance season, Courtney's car breaking a steering arm on lap 82 of 102. Reynolds then held Coulthard at bay by a strong margin.

"As soon as I crossed the line I had a sigh of relief, I have won a race. It was awesome," Reynolds said.

"I was spent . I was trying so hard to keep it off the fence. I had a gap to Coulthard I was trying to manage and he was closing in.

"He (Courtney) was pushing hard. Full credit to him. He was a lot faster than me and if he didn't make that mistake I don't think I would have caught him."

"This was a great achievement. Every championship you win you can take a lot of respect from. But this is great.

"Everyone in FPR has done a fantastic job. Everyone who has helped me out throughout my career can feel a bit special today. I have won a race finally."

Lowndes was surprised to be in front in the points, the result of Whincup and Paul Dumbrell failing to finish yesterday.

"At the end of the day I am still delighted. We got some good points and we are still leading the Championship. If you told me that before I came here this week I wouldn't have believed you," said Lowndes.

"This weekend was my achilles heel and we managed to make up 120 points on Jamie so for me it has been a fantastic weekend.

"Anything is still possible. The competition is really tight. We go to Phillip Island where it's been re-surfaced. I was watching MotoGP and they were having problems with tyres. And some other categories have been nearly two seconds a lap faster so we don't know what to expect until we get down there."

"I went home yesterday and I was really gutted. I thought we should have been on the podium but I let my mate here down and let the team down," Coulthard said.

"We came back to day and the car was not perfect after the damage I had done. Luke did an awesome job. He got the car where he needed to be. To come from 16th to second we have got to be happy with."

In his last year as a full-timer Ingall treated his third almost like a victory.

"It was good in a lot of respects. We have had a pretty tough year for a number of reasons," he said.

"It was really good fun. It is good to race. You don't need to win a race to have a good race. That was a good race. It was competitive, the car was good and it was on the edge stuff."

For team-mate Briscoe it was a solid reward for his first PIRTEK Enduro Cup campaign.

"It's tough this sport which is part of the reason I love coming out here and driving these cars. This has been a blast," Briscoe said.

"Doing the three races, get to know everyone and become part of the sport and not just do the one-off that I have been doing the last few years. It's been a lot of fun and I have enjoyed it."

Whincup and Dumbrell weren't far behind coming home in fourth, with Lee Holdsworth/Craig Baird rounding out the top five and the first Erebus Mercedes home.

Rick Kelly/Reindler were right behind in the Jack Daniel's Nissan, with Garth Tander/Nick Percat, Craig Lowndes/Warren Luff, Will Davison/Steve Owen and Michael Caruso/Daniel Gaunt making up the top 10.

The most important omission from the top 10 was Winterbottom (Steve Richards) after a broken damper kept the #5 in pit lane and caused them to lost two laps. Winterbottom came home in 18th - not ideal for his Championship run.

The next event is the Sargent Security Phillip Island from November 22-24, in Victoria, which switches back to the single driver 60/60 Super Sprint format.