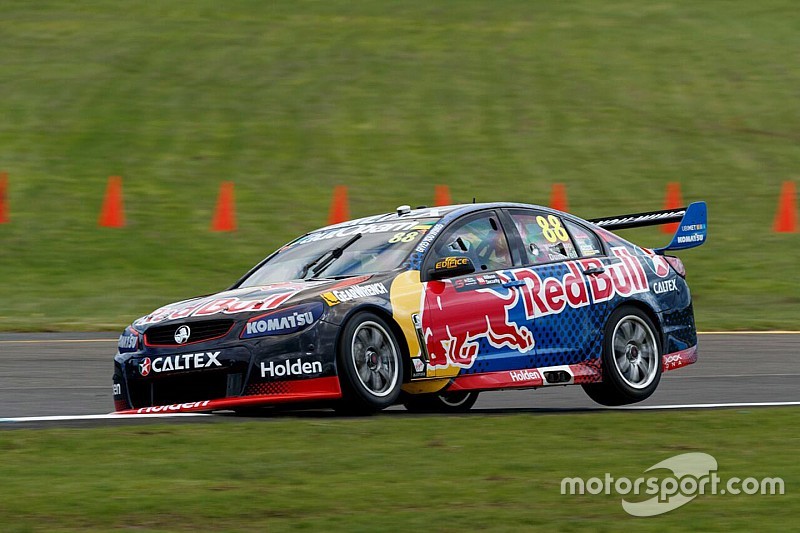 Jamie Whincup and Paul Dumbrell will start the Sandown 500 from pole position, after Whincup took a controlled, but not dominant, second qualifying race win over Garth Tander.

Whincup led Tander for all 20 laps, but was unable to shake the #2 Holden Racing Team Commodore. The gap hung around the half-a-second mark almost the whole way, only blowing out to just over a second at the end.

With the qualifying race win, Whincup and team-mate Dumbrell will start the 500-kayer from pole position tomorrow, sharing the front row with Tander and Warren Luff.

“The car was good,” said Whincup. “We good pushed pretty hard there by the HRT boys, they’re going to be hard to beat tomorrow. But we’re starting in the best spot.”

“The car was really nice,” added Tander. “We’ve got a couple of things we’ll turn for tomorrow if it stays dry. I’m really happy to be starting on the front row.”

The race started in disastrous fashion for pole-sitter Chaz Mostert, who bogged down off the line and dropped back towards the wrong end of the Top 10.

That was not just good news for Whincup and Tander, but for Will Davison as well. The Tekno driver jumped into P3 – although that was about the only highlight of his race.

On Lap 6 he was passed for third by Scott McLaughlin smartly at Turn 1, before slowly running out of grip and dropping behind the likes of Fabian Coulthard, James Moffat, James Courtney, and Shane van Gisbergen.

He ultimately slipped all the way down to P10.

While McLaughlin didn’t look back after taking over P3, the fight for fourth was much more lively. Coulthard held that spot until Lap 17, when van Gisbergen made a mistake trying to pass him into Dandenong Road and fired him off.

That dropped him a couple of spots back, van Gisbergen slowing to fold back in behind the Penske car as per the redressing rules, and then getting back past him at the same spot a lap later.

Coulthard then got caught up with Davison, and ultimately finished 11th after being forced to redress a position himself.

Van Gisbergen, meanwhile, fought back to seventh, admitting that the initial pass on Coulthard was a mistake.

“I just mucked up. I was far enough inside, but had four wheels on the kerb,” he said. “I’m sure he’ll complain and get on Twitter and all that stuff but… it’s all good. We’ve got a quick car. We’re in a good spot for tomorrow.”

“You’ve kind of got to take it in your stride,” added Coulthard. “It’s a little big unfair; it’s a half-arse manoeuvre. And all you’ve got to do is drop in behind the car that you sent off the road. I kind of don’t agree with it. Sometimes it works for you, sometimes it doesn’t.”

The carnage worked beautifully for James Moffat. The Volvo driver slotted into fourth behind team-mate McLaughlin, while Chaz Mostert worked his way back to fifth thanks to all the chopping and changing in the top spots. James Courtney won out too, finishing sixth.

Of the three cars caught up in the first turn, Race 1 mess, it was the #888 Commodore that recovered best. Craig Lowndes and Steve Richards will start 12th, while Scott Pye/Tony D’Alberto will start down in 21st, and Mark Winterbottom/Dean Canto will start 22nd.