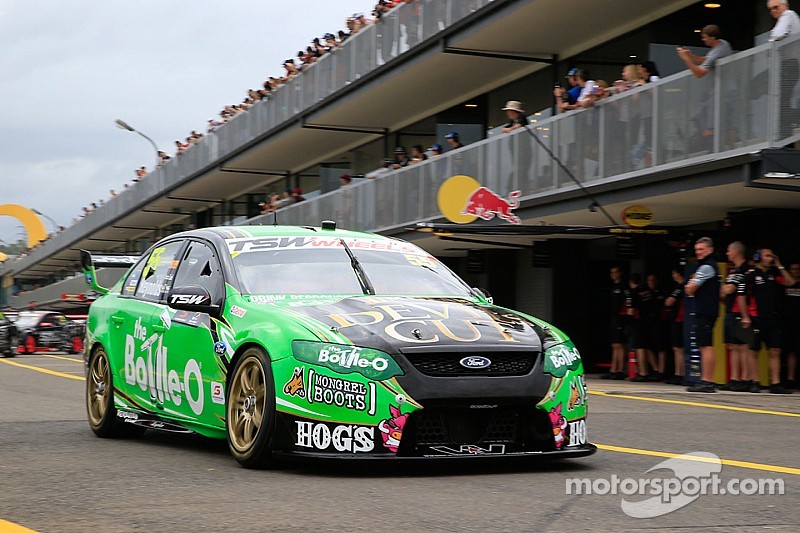 Despite being a fan favorite, the #55 Bottle-O driver is under pressure from management to perform in 2015.

Often referred to as the ‘class clown’ of the category, David Reynolds is by far one of the most popular drivers and personalities in the V8 Supercar series. However, as Prodrive Racing Australia (PRA) boss, Tim Edwards, puts it, “he has also got to deliver on track”.

With only one career win along with a second-place finish at Bathurst to his name, Reynolds only finished 15th in the championship last year and finds himself under the microscope in 2015.

“He (Reynolds) knows he is driving for his career,” said Edwards. “He won’t mind me talking about it because he knows he has to do a better job.

“He needs to be aggressive,” Edwards added. “Sometimes he can almost be too much of a gentleman on the racetrack. It’s going to make you a popular guy but it’s not going to win you races.”

Beginning his full-time V8 Supercars career in 2009 with Walkinshaw Racing, the 29-year old is oftentimes regarded as one of the most outgoing characters in the category. Although this has made him a media favorite, Edwards seems to have taken issue with it.

“Whether you call him the class clown or whatever, he has certainly found his niche with that and the media like him for it,” said Edwards.

“But he has also got to deliver on track, so we have been working with him to get him to focus when he is driving the car, or he is in an engineering meeting; to have that singular focus about what he needs to achieve and that is to win races.”

In a category as closely contested and as competitive as V8 Supercar, Reynolds currently finds himself at a disadvantage as his contract is set to expire at the end of 2015. And with PRA’s young up-and-comer, Cameron Waters, vying for a seat in the main game in 2016, Reynolds will need to produce better results than that of the recent Clipsal 500 which saw him finish the three events in 13th, 17th and 15th.

Although Reynolds began the 2015 season with the Ford Falcon FG II, he will be upgraded to the new FG X for the Formula 1 Rolex Australian Grand Prix which begins later this week.

However, Edwards annunciated that it will take more than just technical improvements to get the results the team is looking for.

“We have been working with him over the summer, making sure he has mentally and physically dotted all the i’s and crossed all the t’s, because it’s not all about putting the best car under someone, there is the mental side of the game as well.”

More drivers out of contract

With Reynolds being out of contract at the end of 2015, there are several other prominent drivers whose contracts are set to expire, as well. Among them is Clipsal 500 Race 2 winner, Fabian Coulthard, who stated that he was happy with his current home at Brad Jones Racing.

Nissan driver, James Moffat, is also off-contract at the conclusion of the 2015 season. Although he is oftentimes regarded as one of the most talented drivers in pit-lane, Moffat is in a similar position as Reynolds as he has only recorded one win with his Altima along with a second place finish at Bathurst last year with Taz Douglas.

However, the Nissan outfit has made huge leaps over the off-season which allowed Moffat’s #99 car to finish 11th and 7th in the first two Clipsal 500 events. Unfortunately, Moffat was robbed of another strong finish for Race 3 as he was collected in a crash involving Chaz Mostert on the final lap.

Meanwhile, rumors about Moffat’s teammate, Todd Kelly, taking a step back from racing next year continue to circulate. Additionally, Volvo boss, Garry Rodgers, stated that the newly added David Wall will need to perform competitively this year or “he won’t stay here”.

There will also be a freshly opened seat at TEKNO which will be vacated by Shane van Gisbergen at the end of 2015 as he moves over to Red Bull Racing Australia next year.  Red Bull team boss, Roland Dane, also hinted that he would eventually like his stable to work as a four-car group which could potentially open yet another coveted spot in pit lane.

Combine this news with the possibility of the newly formed DJR/Team Penske moving to a two-car team, and you have all the makings for a super competitive driver market for an already competitive series.

Winterbottom confident of fight back in Melbourne