Alice Powell believes that her chances of winning the inaugural W Series title are now slim after crashing out on the first lap at Misano.

Powell - who went into the Misano weekend third in the championship having finished on the podium at both Hockenheim and Zolder - made contact with polesitter Fabienne Wohlwend on the entry to the first corner and was sent airborne, triggering a safety car period.

The clash was investigated by the stewards, but ultimately they deemed neither driver to be at fault and dismissed it a racing incident.

Powell’s DNF pushes her down to fourth place in the championship behind Marta Garcia, with race winner Jamie Chadwick extending her lead to 13 points over Beitske Visser.

Misano marked the halfway point of the W Series calendar, meaning there are just three races remaining at Norisring, Assen and Brands Hatch for Powell to recover.

“I got a really good start and a launch off the line, Fabienne maybe not so much," recalled Powell. "Beitske was just in front of me so going down the inside was an option that was closed.

“I chose to go round the outside and Fabienne was getting squeezed ever so slightly by Beitske - understandable - and my front wheel made contact with her rear wheel and that sent me instantly up in the air.

“I was a passenger from then on and I didn't go over luckily, but it's a big dent to the championship.

“I'm only a few points behind Marta and I've dropped to fourth but third is still open.

“I just have to try and keep moving forward and it's not ideal what's happened here but I've just got to move on and it'll be a totally different circuit at Norisring.”

Wohlwend suffered no damage in the accident and was able to continue to take third and mount a consistent challenge on Visser for second place.

The Liechtenstein driver had previous experience of Misano and won both of her Ferrari Challenge races at the circuit last year, but admitted that her poor start was because she was nervous at lining up on pole for the first time in a single-seater.

“I didn't have the best start and I was very nervous because it was my first ever single-seater pole position,” said Wohlwend.

“She [Powell] came on the outside and I could barely see her and we were quite early on the brakes and she hit my front tyre and then went all the way to the gravel.

“I was really worried that my front tyre or front wing would be damaged but I just kept going flat out hoping that was car was ok.” 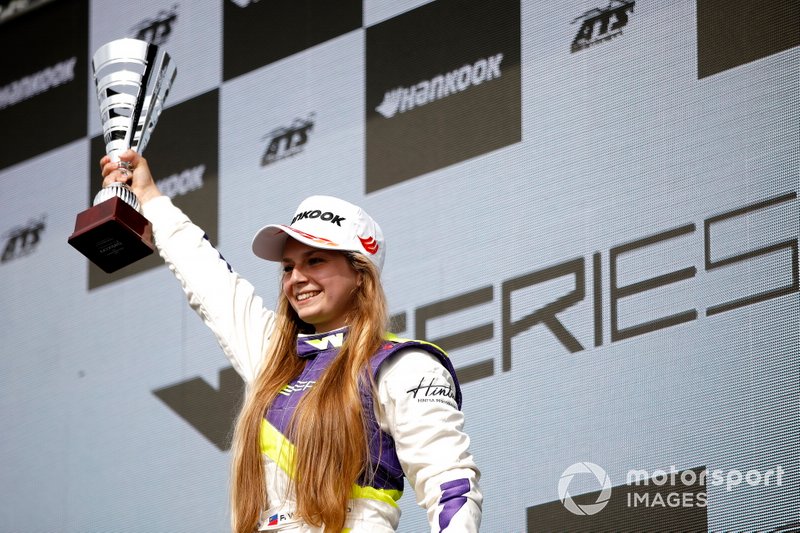