Ingolstadt, February 19, 2012 - The place and date for the world premiere of the new Audi hybrid race car for the Le Mans 24 Hours have been set. The forward-thinking LMP1 vehicle will be presented at the Munich Airport on February 29 before the Audi Annual Press Conference 2012.

Red carpet: The Annual Press Conference on March 1 is one of the most important events in AUDI AG’s fiscal year. And exactly on this occasion Audi Sport will be presenting its major and arguably most ambitious project for the 2012 motorsport season: the new hybrid race car for the Le Mans 24 Hours. The Le Mans prototype will be celebrating its world premiere at the Munich Airport on the eve of the Annual Press Conference. The evening to which about 300 journalists from around the world have been invited is billed as "Looking to the future - tomorrow’s automotive technology." 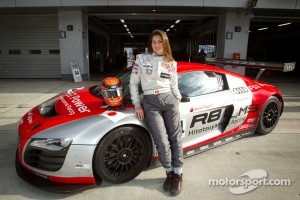 Six out of eight: Slightly modified Sporting Regulations are designed to add suspense to the new FIA World Endurance Championship (WEC). In the manufacturers’ classification of the top LMP1 category only the best-placed vehicle of one automobile manufacturer will score championship points. In addition, only the results of six of the eight races - including the Le Mans 24 Hours for which the points awarded are doubled - will be counted. In the 2012 WEC Audi is fighting with Toyota for the World Champion’s title.

Lady in the GT3 Audi: Cyndie Allemann is the first woman to contest a racing series in the Audi R8 LMS. The 25-year-old Swiss is competing for the Audi customer team Hitotsuyama Racing in d the GT300 class of the Japanese Super GT Championship. Mikio Hitotsuyama’s squad won the Super Taikuyu Series with the Audi R8 LMS last year and scored the 100th victory of the successful Audi customer sport race car.

Honor for Le Mans: The renowned "National Geographic" magazine has ranked the Le Mans 24 Hours as the world’s greatest sporting event that anyone should have visited at least once in their life. The combination of skill, speed and endurance, it said, made Le Mans the world’s best auto race.

Honor for Audi engineer: Leena Gade, the vehicle engineer for the 2011 Le Mans winning Audi R18 TDI, was invited to the "Motor Sport Hall of Fame 2012" at the Roundhouse in London on Thursday night. The event held by "Motor Sport" magazine is regarded as one of the most important social functions of the British motorsport scene.

Following in his father’s tracks: Audi "factory" driver André Lotterer contested the historic "Legend Boucles de Spa" rally this weekend. Lotterer has close ties to Belgium. The German spent his youth there and his father Henry Lotterer worked for the Belgian RAS rally team. At the "Legend Bouclés des Spa" rally the Le Mans winner piloted a Porsche 911 SC RS, a car resembling the one his father, who died in 2009, had prepared in the nineteen-eighties.

Finale in India: The place and date for the tenth race of the FIA GT1 World Championship in which the Audi customer team WRT is putting two Audi R8 LMS ultra cars on the grid have been set. The season finale will be held at the Formula 1 circuit near New Dehlhi in India on December 2. The season will open at Nogaro (France) on April 8.

Indoor session: A photo shoot with DTM racer Mike Rockenfeller and the new Audi A1 Sportback for the Audi Sport magazine "Adrenalin" had to be moved indoors to the Audi Forum Ingolstadt at short notice on Wednesday due to a heavy snowstorm. The change in venue gave the 2010 Le Mans winner an immediate opportunity to view the re-designed new car delivery section with his expert eyes.

On the controller: The five-time Le Mans winner Frank Biela has discovered a new passion: slot car racing. With an Audi R8 LMS and a team of his own the former DTM Champion and long-standing Audi factory driver is contesting the legendary rallye racing Carrera Cup this year. The season will open in Hamburg next Wednesday.

A word from ... Mattias Ekström

In a little more than ten weeks from now the new DTM season will start, marking a completely new era for the DTM. Are you excited about that?

I’m definitely very excited because we’ve been waiting for this for a long time in the DTM. A new manufacturer is joining the series and the regulations are new. At Audi, we’ve been doing a lot of development work over the winter. That’s why I’m very eager to finally go to Hockenheim and to see how good our work has been compared with BMW and Mercedes. Tests never really give you the right answer to this; that only happens at the first qualifying session and the first race.

The new DTM vehicles will be homologated on March 1. What does that mean for the next two weeks?

Obviously, our technical staff would be much better qualified to answer this question. But principally speaking there’s only fine-tuning work left at this stage. The key decisions were made a long time ago. Every manufacturer will now try and guard their little secrets up to the last moment. After March 1 the cards will be revealed a little more - also during the track tests.

You’ve already covered many kilometers at the wheel of the new Audi A5 DTM. What’s your impression? Where does Audi stand compared with the competition? What can the fans expect of the 2012 DTM season and, most importantly, of Audi?

The car is definitely a bit different to drive than the A4. The biggest difference is made by the new Hankook tire which is a bit wider - that changes the driving style to some extent. And we’ve got the gearshift on the steering wheel now. That, too, makes a bit of a difference. There are many things you can’t fully judge at this point in time because we haven’t driven the latest racing version yet. But I’m pretty sure that the new cars will be about as fast as the A4. We’ve got a little more downforce but also slightly higher weight. I think these two aspects balance each other. Nobody can tell at the moment where we stand compared with the competition. We really have to wait until the first race at Hockenheim. In any event, the fans can expect things to get really tight. The new regulations have reduced the freedom of the engineers quite a bit. That’s why the whole field will be very close. Saturday will be the most important day for a successful weekend. You’ve simply got to be very far at the front of the grid. The fans can expect Audi to run at full throttle to repeat the champion’s titles of the past few years. But BMW and Mercedes-Benz will be driving flat out as well. The three premium manufacturers in the same championship with the same aims: That’ll be a tough number! If I were a fan I definitely wouldn’t miss that.

Coming up next week