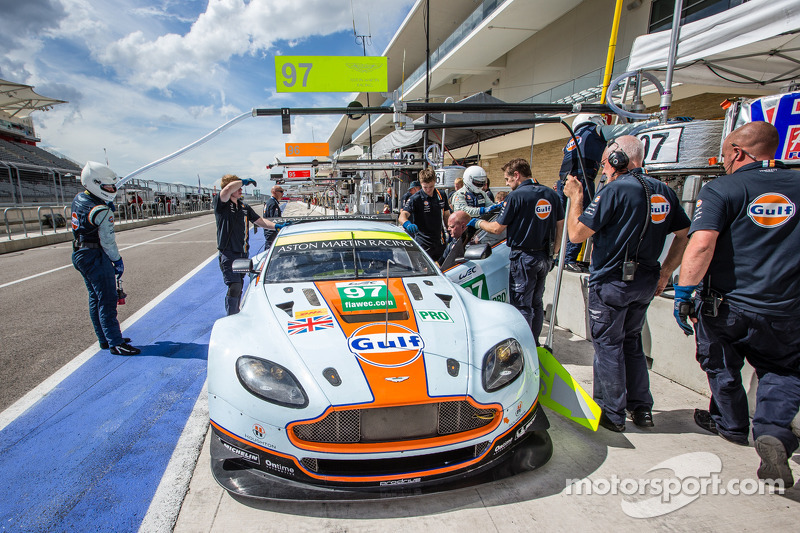 Aston Martin's no97 and no99 locked out front raw for Japanese WEC race, nr51 Ferrari 458 will head second raw.

Fred Makowiecki and Stefan Mucke claimed pole position in the LMGTE Pro class for tomorrow’s 6 Hours of Fuji with an average time of 1m38.114, with Makowiecki, in the no97 Aston Martin Vantage, setting the fastest of the four laps that count towards the average time.

It was a 1-2 for Aston Martin after the no99 Vantage of Pedro Lamy and Ritchie Stanaway was 0.477 seconds behind their flying teammates. The nr51 Ferrari 458 of Giancarlo Fisichella and Gianmaria Bruni will head the second row, with the championship leaders 0.044 ahead of the two Porsches, with the nr91 911 of Patrick Pilet and Jorg Bergmeister just 0.042 ahead of the nr92 car of Marc Lieb and Richard Lietz. The nr71 AF Corse Ferrari didn’t take part in the session due to an ongoing problem with the fuel system on the 458, which the team say will be fixed ahead of the race tomorrow. The Ferrari will have to start at the back of the grid.

Aston Martin also claimed pole position in the LMGTE Am class with the no95 Vantage of Bruno Senna and Christoffer Nygaard posting an average time of 1m40.649. There was a tussle for the top spot with the nr50 Larbre Competition Chevrolet Corvette of Fernando Rees and Julien Canal, but the Brazilian / French duo had to settle for second after their average time was just 0.165 slower their Brazilian / Danish rivals. Aston Martin will also head up row two on the LMGTE Am grid, with double race winners Jamie Campbell-Walter and Stuart Hall posting a 1m40.824 average, 0.4 seconds ahead of Paolo Ruberti and Christian Ried in the nr88 Proton Competition Porsche. The nr81 8 Star Motorsports Ferrari of Davide Rigon and Rui Aguas was the fastest of the three 458s, with the nr76 IMSA Performance Matmut Porsche of Jean-Karl Vernay and Marcus Palttala taking the final grid position for tomorrow’s race.

Krohn Racing had extensive program on practice day in Fuji