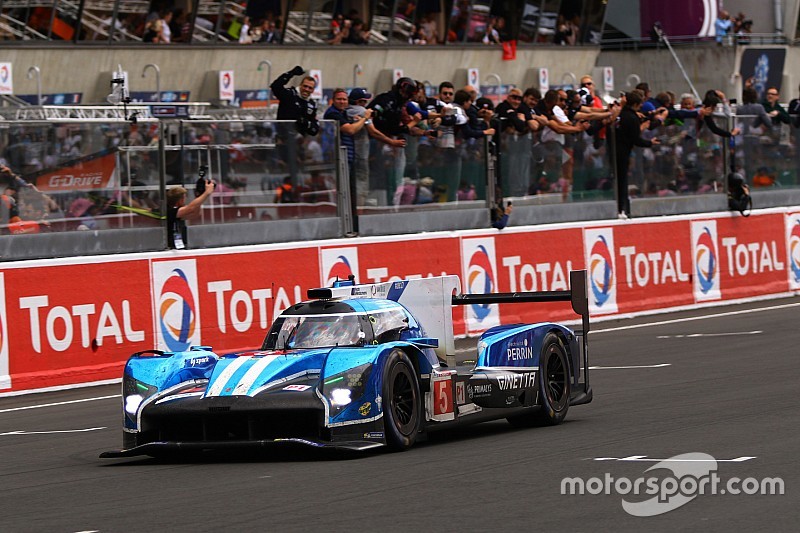 Manor Endurance Racing has stated that it will play no part in the running of the solo Ginetta-AER G60-LT-P1 on the entry at next month's Fuji round of the WEC.

Manor boss John Booth told Motorsport.com: "Manor provided equipment, expertise and experienced people into the LMP1 project, managing the team and the trackside operations, starting from the car build through to and after the Le Mans 24 Hours, but for commercial reasons we are not now involved."

Ginetta boss Lawrence Tomlinson would not confirm that the British constructor has taken over the running of the TRSM team from Manor ahead of Fuji.

"TRSM holds the licence and it is their decision who they employ to run the car," he said.

"Ginetta has done everything it can to get the cars out there and has subsidised the programme so far.

"We as a factory just want to get the car out there with its new AER engine and see where it is against the Toyota and the Rebellion."

The news that Manor is no longer involved in the project follows the no-show of the Ginettas at last month's Silverstone round of the WEC after a swap of engine from a Mecachrome powerplant to the AER unit.

This counted as a model change, which required the entrant to make an application for dispensation to the FIA's Endurance Committee at least a month before the start of the meeting.

Manor sporting director Graeme Lowdon said that the team had not been in a position to do this, but Ginetta insisted that the car had been homologated with the new engine in time and that it had made TRSM and Manor aware of the change.

The WEC entry for the TRSM CEFC Racing team is held by a company called TRSM China Motorsport, of which Lowdon is the sole director.

It contracted Manor Endurance Racing as a service provider.

There are known to have been funding issues between TRS, a Chinese promotions company, and TRSM after primary sponsor CEFC China Energy ran into financial problems earlier in the year.

Lowdon is understood to have handed over his responsibilities as TRSM's official representative with the WEC to a TRS employee.

A pair of Ginettas were entered in the opening three rounds of the WEC, although it has now emerged that the two-car entry was only confirmed with the series for Spa, Le Mans and then Silverstone.

That explains why a single G60-LT-P1, to be driven by Oliver Rowland, Alex Brundle and Mike Simpson, is on the entry for the Fuji 6 Hours on October 14.

It was always planned that the additional car for the first three races would be funded by Ginetta.

A G60-LT-P1 with the AER P60B V6 turbo engine was given a shakedown at an airfield venue in the run-up to the Silverstone WEC round.

It has subsequently tested at Silverstone with an undisclosed driver.