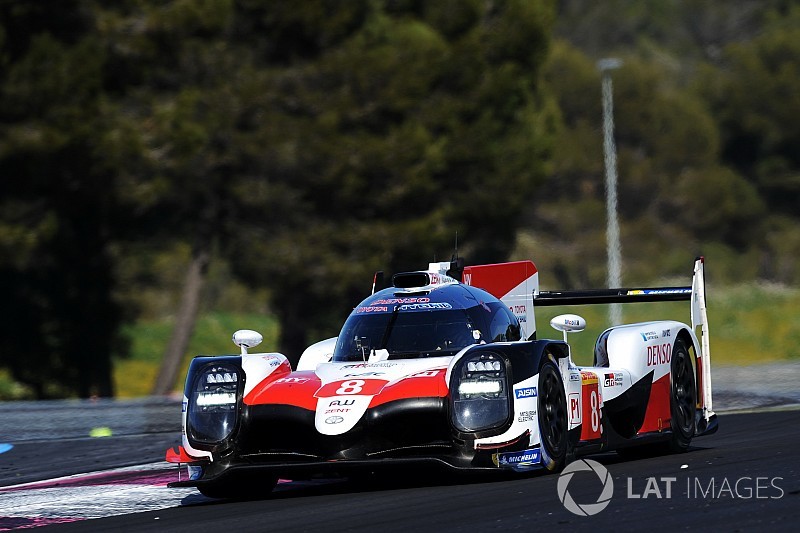 Toyota concluded the 30-hour FIA World Endurance Championship Prologue test at Paul Ricard with a four-second advantage over the quickest of the privateer LMP1s.

Mike Conway's best time in the high-downforce spec #8 Toyota TS050 Hybrid, a 1m32.662s set on Friday afternoon, remained the benchmark time for the remainder of the test.

However, Toyota has admitted that both this time and the best effort recorded by Anthony Davidson in the Le Mans-spec #7 car were set while the cars were not conforming to the WEC's Equivalence of Technology rules.

It returned within the EoT regulations for the night-time segment of the test - in which only 15 of the 35 cars present took part - and the seven-hour second daytime session, but neither car improved its times from Friday.

Vitaly Petrov's best time in the night was good enough for the #11 SMP Racing BR1-AER to conclude the test third-fastest, albeit 4.372s off the pace set by Toyota.

Rebellion's new Gibson-powered R-13 was fourth fastest thanks to Andre Lotterer's best time in the evening, ahead of the second SMP BR1 of Stephane Sarrazin and the ByKolles ENSO CLM P1/01-Nissan, which was briefly third in the night thanks to Tom Dillmann's best effort.

The only one of the nine LMP1s to improve in the second daytime session was the #6 Manor Ginetta G60-LT-P1-Mecachrome, whose best time was set by Williams Formula 1 young driver Oliver Rowland.

DragonSpeed's Gibson-powered BR1 and the second Manor-run Ginetta, which was not completed in time to run until late on Friday, completed the LMP1 timesheets.

F1 race winner Pastor Maldonado's best time from Friday was good enough to end the test on top of the LMP2 times in the DragonSpeed Oreca.

Nicolas Lapierre came within 0.317s of Maldonado's benchmark with his best time in the Alpine-badged Signatech Alpine on Saturday morning, moving ahead of the TDS Racing Oreca which failed to improve.

Quickest of the non-Orecas was the Racing Team Nederland Dallara, which was less than a tenth adrift of Matthieu Vaxiviere's best time in the TDS car.

Porsche concluded the Prologue with a 1-2 in the GTE Pro division, with Gianmaria Bruni's class-topping effort in the #91 911 RSR night going unchallenged throughout the remainder of Saturday.

The two Ganassi-run GTs were third and fourth in class, courtesy of Harry Tincknell and Olivier Pla's efforts in the daytime session on Friday.

Fifth and sixth in the combined GTE classification were the top two Am cars, the #88 Dempsey-Proton Porsche and the #86 Gulf Racing Porsche.

Matteo Cairoli improved shortly before noon on Saturday with the best time in class, a 1m53.155s, enough to beat Ben Barker in the #86 machine by a scant 0.004s.

The best of the AF Corse Ferraris was fifth fastest in GTE Pro with Alessandro Pier Guidi's time on Friday, ahead of the lead BMW M8 and the quicker of the two new-gen Aston Martin Vantages.