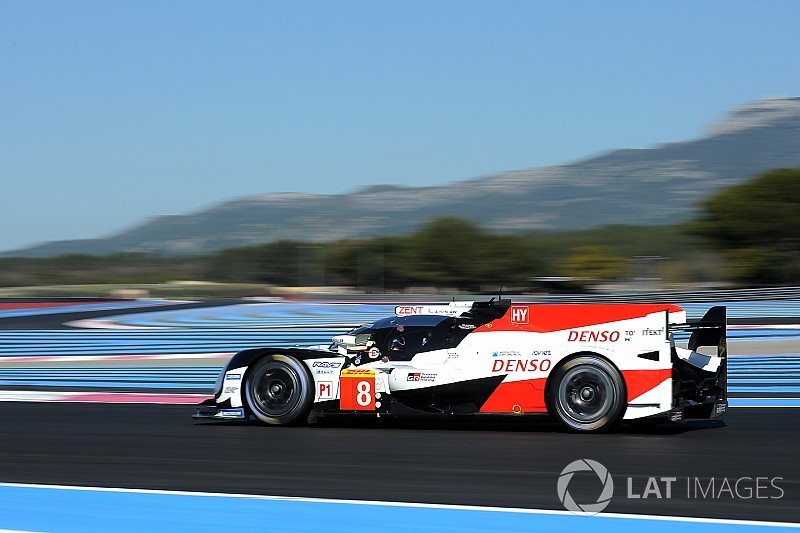 Toyota held a four-second advantage over the best of the LMP1 privateers at the halfway stage of the first session of the FIA World Endurance Championship Prologue test at Paul Ricard.

Sebastien Buemi topped the times after four hours in the high-downforce version of the TS050 Hybrid on a 1m34.151s, while Mike Conway was just over a second slower on a 1m35.391s in the Le Mans-trim Toyota.

The Toyota times compared with the 1m38.921s set by Oliver Rowland in the best of the Manor Ginetta-Mecachrome G60-LT-P1s.

DragonSpeed's Gibson-powered BRE was fifth on a 1m38.854s from Ben Hanley, while ByKolles took sixth in the updated version of its ENSO CLM-Nissan P1/01 with Oliver Webb driving.

The new Rebellion-Gibson R-13 designed and developed by Oreca has hit the track in earnest after completing a brief shakedown at Paul Ricard at the start of the week.

Neel Jani and Andre Lotterer had completed 39 laps after four hours of testing, the car ending up on a best time of 1m40.165s.

Rebellion has only one car at the test, while the second Manor Ginetta in which Briton Dean Stoneman will complete the first two WEC rounds has yet to take to the track at Ricard.

That put him less than a tenth up on the Signatech Oreca, which ended up on a 1m41.843 set by Andre Negrao. Matthieu Vaxiviere was third fastest in the TDS Racing Oreca.

Porsche driver Richard Lietz jumped to the top of the GTE Pro times just before the four-hour mark.

Harry Tincknell was third in the second Ford entry on a 1m52.843s ahead of the second Porsche and the best of the AF Corse-run Ferraris.

The best of the new BMW M8 GTEs took sixth position in class on a 1m53.701s, while the fastest of the second-generation Aston Martin Vantage GTEs was eighth on a 1m54.961s.