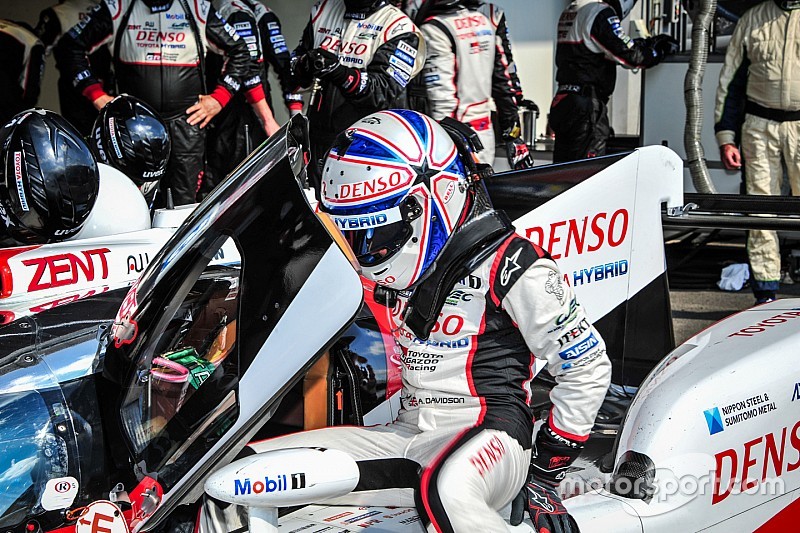 Toyota’s Anthony Davidson will not take any further part in this weekend’s Mexico City round of the FIA World Endurance Championship.

Davidson banged his head and bruised his ribs in a big testing accident at Magny-Cours four weeks ago, and although he tried a five-lap run in the collective test at Mexico City on Thursday morning, he has decided against taking any further part in the race weekend.

He will not be replaced, meaning Sebastien Buemi and Kazuki Nakajima will drive as a duo in Mexico.

Speaking exclusively to Motorsport.com, Davidson said he wanted to prepare as much as possible for the following round at Austin’s Circuit of the Americas, which is likely to be the hottest round of the series.

“We had a bit of a testing incident,” said Davidson. “A few weeks back we were at Magny-Cours and there was an issue with the car which, unfortunately, put me off the track at a fairly high speed. I can’t go into specifics other than it was a technical issue. In testing you explore the limits technically and discover things you don’t find in a race weekend.

“I ended up hitting the wall pretty hard. I hit my head and bruised my ribs pretty badly. I had a scan afterwards and obviously they found no brain to damage in the first place – the old cliché! No, seriously it was a big lateral impact and I did hit my head hard, around the 30g level – and I even developed shingles afterwards as well. I’ve been in the wars!

“Four weeks is on the limit for ribs recovery. If anyone has had rib pain, you’d know how long it takes to heal.

“I came here with trepidation, I tried to remain positive but it was always in the back of my mind that it would be too much, too soon. I tried to drive this morning in the test, and it proved to be a little bit too much. I felt it on the out lap, and I spoke to Seb and he agreed that any sign of pain he wouldn’t drive – that gave me the comfort to say ‘I’m not quite ready’. I’m not miles away, I could've done it at a push, but I’d have come away with more pain and that adds on to the timeframe of full recovery.

“It’s a real shame, I was enjoying it, I love new tracks and I was putting off the pain, but I was driving in a protective mode, I wasn’t taking kerbs – my heart wanted to be out there, but my body didn’t.

“So looking forward to Austin in two weeks, I prefer to be fighting fit, 100 percent, than struggle through a weekend and possibly do myself more harm than good.

“I didn’t want to put the team or my teammates in that situation for the most physically-demanding race of the year – it would be almost impossible to do that race with two drivers. That’s not fair on anyone.

“I feel happy with the decision, obviously my heart wants to race and it was hard to come to this decision, but the team support me.  I’ll be back in Austin fighting fit, I’m confident of a full recovery by then.”