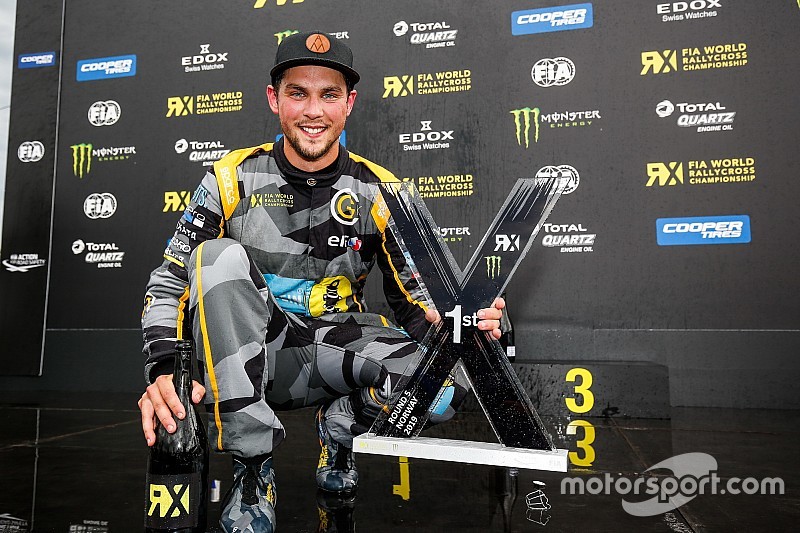 Anton Marklund has been stripped of his maiden World Rallycross win at the Norwegian round in Hell due to a post-race technical infringement.

The decision hands Niclas Gronholm, who had initially finished third on track before being promoted to second when Kevin Hansen was penalised for contact, his first World RX win.

Gronholm had topped qualifying and won the first semi-final in torrential conditions, but lost out in the final after a poor start.

GC Kompetition driver Marklund was disqualified from the entire event by Steward’s Decision 42 No 13, following checks at post-race scruiteneering that found the front bumper support-bar to be too thick.

“The front bumper was found not to be in compliance with the Technical regulations of the FIA World Rallycross Championship,” stated the Steward’s decision. “The front bumper mounting was changed from the original and this cross member was made from a tube which diameter was 50mm and the material thickness was 1.96mm.”

As per Appendix J Article 279.10.2.d of the regulations, the maximum thickness of the material used in the front bumper mountings must not be greater than 1.5mm.

Marklund has been removed from the full classification, meaning Gronholm takes the first win for his father’s GRX Taneco squad, Hansen finishes second, as he did originally on track, and Janis Baumanis claims a maiden World RX podium.

Gronholm lost out on a career first victory in the opening round of the season after he won on track but was later penalised for contact with Kevin Hansen and was classified second.