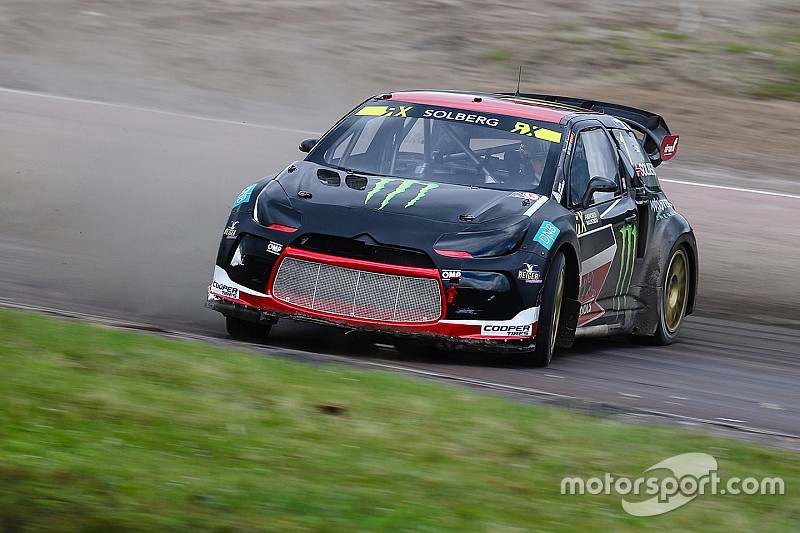 Reigning double World Rallycross Champion Petter Solberg set the fastest time in the opening free practice session at the Swedish round of the series on Friday evening.

Heavy rain had fallen through the day, but stopped just before the World RX practice run, offering up a slippery surface on the Holjes circuit.

Solberg ran in the first batch of six cars but it was round five winner Andreas Bakkerud who was fastest with a 48.474s lap, Solberg was second just 0.132s behind.

Peugeot-Hansen team mates Timmy Hansen and Sebastien Loeb were on track at the same time but were unable to match the Norwegian drivers’ pace.

With the track drying, the European Championship Supercar competitors ran after all World RX runners had completed one four-lap practice in the joint session, and immediately went faster.

As the World RX drivers returned for their second runs, Solberg set the fastest time on the drying track with a 45.705s lap, which wouldn’t be beaten before the end.

Johan Kristoffersson climbing to second 0.092s behind Solberg and Bakkerud was another half a tenth further back.

With the weather expected to be changeable over the Holjes weekend, Torsby-based Solberg will try and exploit his local knowledge. “The weather has been very consistent today,” said Solberg.

"The weather for tomorrow has looked very similar for the last few days; it looks like rain. We are happy with the changes we have made to the car since Norway and we will keep working on the setup. It looks good.”

World RX Championship leader Mattias Ekstrom, so far the only driver to win a World Championship event at Holjes (2014 – 2015) was fourth with Swedish compatriots Kevin Eriksson and Timmy Hansen fifth and sixth. Loeb wound up ninth.