Citroën : On course for another podium finish 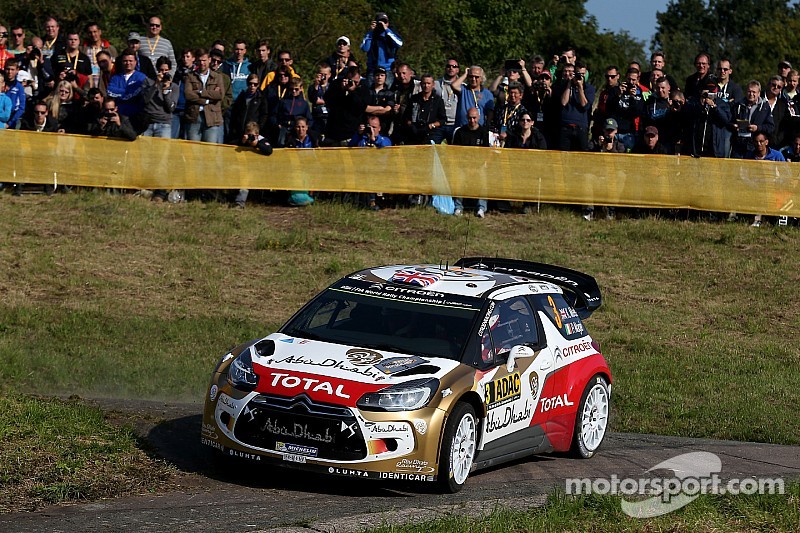 In second place at Rallye Deutschland ahead of the final day, Kris Meeke and Paul Nagle are determined to secure the best result of their WRC career tomorrow in Trier.

On roads left muddy as more cars completed the stages and then made slippery by showers in the afternoon, Kris Meeke and Mads Østberg maintained good pace throughout the day.

The British driver managed to consolidate his second place behind Jari-Matti Latvala, whilst holding off attacks from his rivals. Meanwhile, the Norwegian found a good feeling in the car and was able to move closer to Mikko Hirvonen and Elfyn Evans.

I’ll be trying to do my very best tomorrow, without going beyond the limits.

Early leaders in the WRC2 category, Sébastien Chardonnet and Thibault De la Haye showed once again their potential recording the fastest splits on the opening 38 kilometres of the first run on Panzerplatte Lang. However, a mechanical alert on their DS3 R5 led to a brief lapse in concentration, unfortunately resulting in them going off the road and having to retire.

Eric Camilli went off in the same section when leading in the Junior WRC class. His misfortune left Stéphane Lefebvre in first position. The winner of the first two rounds leads this evening from the German Christian Riedemann, the Frenchman Quentin Giordano and the Briton Alastair Fisher.

The final leg will be made up of four stages and 74 kilometres of timed sections. Another early start awaits the crews – cars are due to leave parc ferme at 6.15am. The televised Power Stage (Grafschaft 2) starts at 12.08pm. The rally is scheduled to finish in Trier at 2.30pm.

Kris Meeke: “It was a really tough day, with the changeable weather. We went with soft tyres for both loops. Some of our rivals went for the hard tyre, but I don’t think it made a big difference. I lost a few seconds in the afternoon due to a puncture. Fortunately, we made up some time on the 42 kilometre-long Panzerplatte Lang test this evening. I’ll be trying to do my very best tomorrow, without going beyond the limits.”

Mads Østberg: “We completed several stages in the rain. But I found the conditions were easier than you might have expected. Our position hasn’t changed compared with yesterday. And yet, I feel better and better in the car and our pace is increasing. We are closer now to Elfyn and Mikko. The aim is to try and get past them tomorrow.”

Yves Matton (Citroën Racing Team Principal): “Kris produced another solid performance again today. We knew that he had a lot of potential on tarmac from when he competed in the Junior WRC with Citroën. We hope he can go on tomorrow to secure what would be a richly-deserved result. Mads really increased his pace today. He is still right there in the scrap for sixth with Elfyn and Mikko. His aim is to rack up the miles on tarmac to prepare as well as possible for the Rallye de France. He has to keep going and try and grab sixth position, which is within his reach.”

SS7 – Stein & Wein 1 (17.53km) – Robert Kubica made the most of favourable road conditions to set the fastest time. He finished ahead of Thierry Neuville, Jari-Matti Latvala and Sébastien Ogier, who had rejoined under Rally 2 rules. Kris Meeke and Mads Østberg’s positions were unchanged.

SS8 – Peterberg 1 (11.08km) – The stage was cancelled after Sébastien Ogier crashed heavily and went off.

SS10 – Panzerplatte Lang 1 (42.51km) – Having opted for hard tyres, Thierry Neuville and Dani Sordo finished among the frontrunners. Jari-Matti Latvala still grabbed the stage win, followed by Neuville, Meeke and Sordo. Sixth-fastest, Mads Østberg made up some time on his main rivals.

SS12 – Peterberg 2 (11.08km) – Another stage win for Robert Kubica, who was first on the road. In the rain, Mads Østberg and Kris Meeke set the sixth and eighth fastest times respectively.

SS14 – Panzerplatte Lang 2 (42.51km) – On the final 42 kilometres of the day, Kris Meeke managed to finish in second position behind Jari-Matti Latvala. He extended his lead over Thierry Neuville by a further 3.4 seconds. Mads Østberg moved closer to Elfyn Evans, who now only has a 1.2-second advantage, and Mikko Hirvonen, who is 6.1 seconds ahead of the Norwegian.

Citroen: With the finish line in sight…