Citroën: An endurance rally in Argentina 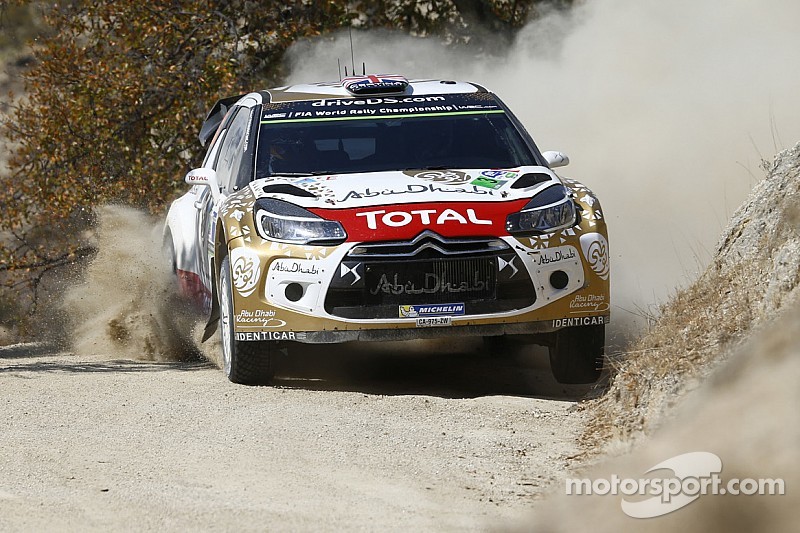 The Citroën Total Abu Dhabi World Rally Team has conducted extensive testing in order to prepare for this event, which will combine endurance on the opening two legs with a final day sprint.

Seven weeks after Rally Mexico, the Citroën Total Abu Dhabi World Rally Team crosses the Atlantic again to contest the fourth round of the World Championship calendar in Argentina. For the first time in 2015, three DS 3 WRCs will line up at the start.

Since returning from Mexico, the technical team has been preparing the three DS 3 WRCs for this rally and planning for the rest of the year. A test session was held in Portugal and development work was done in conjunction with Michelin ahead of the tarmac rounds in the second half of the season.

In Argentina, I am going to adopt the same strategy as in Mexico.

The Argentina route has been partly revised this year and now centres on four long stages, each in excess of fifty kilometres. The new regulations prevent crews from accessing any information about their performances.

Runners-up at Rally Mexico in their DS 3 WRC, Mads Østberg and Jonas Andersson arrive in Argentina with lofty ambitions. On this, their fifth appearance, they hope to reproduce the same pace they enjoyed in March in order to bring home as many points as possible. They had a good result here in 2012, finishing third behind two DS 3 WRCs.

Still looking to record their first strong result this year, Kris Meeke and Paul Nagle return to Argentina equally determined to shine. Supported by the team which has won an impressive nine times at Villa Carlos Paz, they will be making their second WRC appearance at this round. In 2014, they finished on the podium in their debut outing here in the DS 3 WRC.

Stéphane Lefebvre, as ever alongside co-driver Stéphane Prévot, will continue to learn about World Championship rallying as he tackles this race for the first time in a DS 3 R5. As Rally Argentina is not included in his WRC2 calendar, he won’t be scoring any points.

Away from the racing action, the crews will take part in communications operations organised to support the launch of the DS brand in Argentina.

Yves Matton (Citroën Racing Team Principal): “This seven-week break is a bit of change from the normal rhythm of the World Rally Championship. Our schedule has therefore been a bit different this year, with specific logistics. Because although we have more time now, the events are going to come thick and fast and so we have obviously planned for our future needs. The break has also let our drivers have a little time off, but they have come back with fire in their bellies! We have worked with Kris Meeke to identify the areas in which he needs to improve.

He’ll be approaching Rally Argentina from a different angle to try and avoid the errors that cost him results in the early part of the season. With a more relaxed frame of mind during preparation, he has a bit more wiggle room to ensure he makes it to the finish without any mistakes. Mads Østberg is on a positive run. He is enthusiastic and his attack-minded approach has paid dividends. We know he can’t wait to get back in the car!”

Mads Østberg: “After our excellent result in Mexico, we have had a long period without racing. We rarely have seven weeks between two rallies. It’s almost as long as the winter break around Christmas! So I can’t wait to get back in my DS 3 WRC. We had a good test session after Mexico. I was able to work on the new features of the 2015-spec DS 3. In Argentina, I am going to adopt the same strategy as in Mexico. I’ll need to set a consistent, quick pace right from the word go, and then maintain it. The aim is to continue to pick up big points.”

Kris Meeke: “I wanted to take advantage of this short break to take a step back. It is important to arrive in Argentina with a fresh perspective. Two thirds of the route have changed this year, so experience will be less important. Last year, I was quick right from the start of the rally. I really enjoyed this event. The context isn’t very different this time around. I know what I need to do. I only have to concentrate on driving without making any mistakes and that way, I’ll find the right pace.”

Khalid Al Qassimi: “I can’t wait to start my first WRC rally of the season. Rally Argentina is totally new to me. Obviously, I feel more comfortable on gravel, but we’re going to have to do a lot of work on the pace notes and I’ll need to try and get used to being in the car again after not driving the DS 3 WRC for the last six months. You also have to bear in mind that the car now has steering wheel-mounted gearshift paddles. So I’ll need to get used to them as quickly as possible.”

Two thirds of the rally in four stages

The 2015 Rally Argentina features a modified itinerary. The event will start with a super special stage in the city of Merlo, in the province of San Luis, before heading back to the well-known valleys of Punilla and Traslasierra with a route that has been partially revised.

The 4.59-kilometre shakedown between Villa Garcia and Cabalango is scheduled to take place on Wednesday afternoon between 3pm and 6.30pm, with the traditional pre-event press conference held at 7pm (GMT -3).

The crews will leave the Villa Carlos Paz service park on Thursday at 1.45pm for a long road section of over 230 kilometres. The first stage, a 2.68-kilometre city centre test, will be contested in Merlo from 7pm. The crews head back to Villa Carlos Paz at the end of the day.

At 6.30am on Friday, the rally proper gets underway as the crews tackle the first endurance stage of the rally. Held the opposite direction to previous rallies, Agua de Oro/Ascochinga (51.99km) will provide the first real clues as to the pecking order of the crews before they take on Villa Bustos/Tanti (20.31km), a stage that is unfamiliar to the younger drivers. After a thirty-minute service, the loop will be repeated in the afternoon, interspersed with a run on the Fernet Branca super special stage (6.04km) broadcast live on television.

Saturday’s leg will follow a more or less identical pattern. After Capilla del Monte/San Marcos (23.10km), the crews will tackle San Marcos/Characato (56.77km) and the itinerary will be strictly the same in the afternoon, after the midday service.

The final leg will be more of a sprint for the finish. There will only be two runs on El Condor/Copina (16.32km) without a service period, the Power Stage bonus points being awarded on the second pass before the rally draws to a close just after midday in Carlos Paz.

Kubica pulls out of Rally Argentina