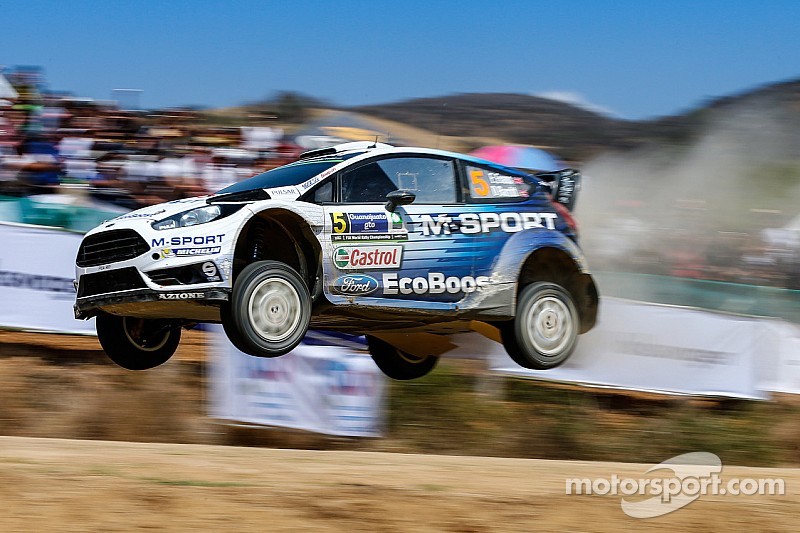 There was more drama for the “TiTänak” following yesterday’s epic repair.

Rally Mexico never fails to deliver the drama, and this year’s edition is proving to be no different. For the M-Sport World Rally Team, Elfyn Evans is currently holding a strong fourth place but there was more drama for the “TiTänak” following yesterday’s epic repair.

Despite working perfectly when Ott Tänak and Raigo Mõlder delivered the Ecoboost-powered Ford Fiesta RS WRC into parc fermé yesterday evening, the ruthless reservoir had not finished with the team. Sitting in the holding area over night, the dampness fought back – bringing unwanted gremlins for this morning’s opening fifteen minute service.

Towing the car into its bay – to the applause of their fellow manufacturer teams – the M-Sport technicians were not going to give up without a fight and worked tirelessly to ensure the Estonian could drive out of service just five minutes later than scheduled.

We need to get back on the horse and keep pushing.

Unfortunately, the Fiesta came to a halt after the first refuel. Tänak and Mõlder are skilled mechanics in their own right and were able to get the car running again, but could not make the start of the morning’s first stage in the allocated time.

After the crew drove the car back to service, the team let her bathe in the Mexican sun – drying the components before they embarked on Rally 2.1.

Mission accomplished, a faulty sensor was found to be the culprit and the M-Sport technicians delivered another master class before delivering “TiTänak” to the overnight parc fermé – ready to fight another day on tomorrow’s final speed tests.

In the sister M-Sport Fiesta RS WRC, Evans and co-driver Daniel Barritt climbed into a strong fourth place over the course of the day. The Welshman has delivered his strategy to the letter this weekend – pushing when confident and adopting a more cautious approach when not.

Evans may be one of the most inexperienced drivers in the field, but he is also one of the most composed and intelligent. His clever strategy is reaping the rewards, and the Welshman is on course to equal his best ever FIA World Rally Championship result.

Elfyn Evans (4th) said: “Today has been a good day overall but it has been more about being reliable than anything else. We didn’t find a great rhythm this morning, but then Dani [Sordo] had some problems which really took the pressure off.

“This is such a difficult rally and tomorrow will be all about making sure we get safely to the finish. Of course anything can still happen, but I think fourth place would be another great result for us on only our second time here.”

Ott Tänak (28th) said: “The boys did an awesome job last night so it was a real shame for everyone not to be able to start the stages today. In the end it was just a really small detail that stopped us this morning – literally just a sensor! It’s fixed now and we’re ready to get out in the morning.

“It’s really important for myself and Raigo [Mõlder, co-driver] to get back out tomorrow. It’s the only way to regain the pace. We need to do some driving and as we don’t have any pressure we can just enjoy these amazing stages. We need to get back on the horse and keep pushing.”

Team Principal, Malcolm Wilson OBE, said: “It was a fantastic effort from the whole team last night so it was disappointing for everyone not to get Ott’s [Tänak] car back on the stages today. There was some moisture in a component that we weren’t expecting, but we’ve addressed that now and should hopefully see the boys back on the stages tomorrow. It’s really important for them, and for the whole team, to get back out there.

“Elfyn [Evans] has driven a very intelligent rally so far. He’s in a really strong position at the moment and another fourth place finish would be a fantastic result on only his second time at this notoriously difficult event. Who knows, if the other teams decide to let their drivers fight, anything can happen!”