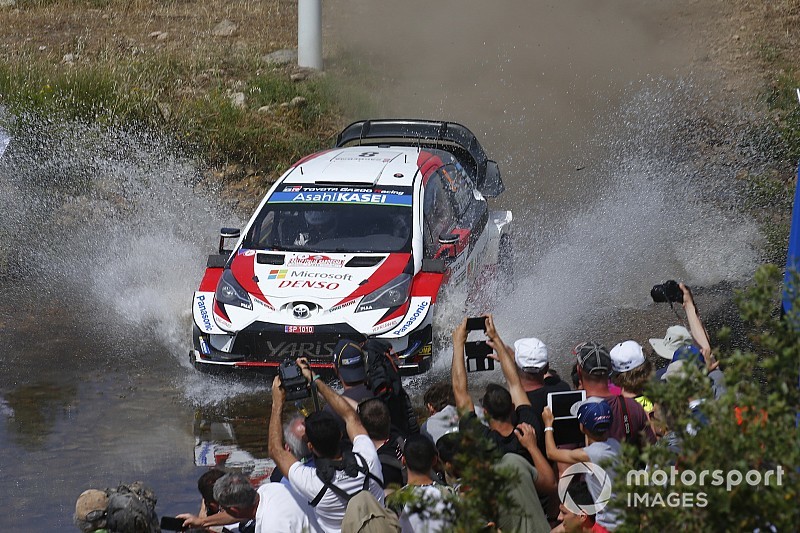 Tanak began Saturday 11.2s shy of Sordo, but won all three of the morning’s tests to rocket into a 6.4s lead heading into the afternoon loop.

He set about extending that gap immediately on the second pass of Coiluna-Loelle, pulling another 4.2s out of Sordo with his fourth fastest time of the day. Monti di Ala would yield another stage win for Tanak, who extended his overall lead to 17.7s on the test.

Tanak duly followed the script he had written for himself, and took the final test of the day to win all six of Saturday’s stages.

Sordo was powerless to halt Tanak’s attack, but remains on course for his first podium finish of the season and some important manufacturer points for Hyundai.

Teemu Suninen is third, but the M-Sport driver finds himself in no man’s land. He struggled to keep pace with Tanak, but did slim Sordo’s advantage ever so slightly from 20.7s to 17s on his first event with new co-driver Jarmo Lehtinen.

Elfyn Evans and Andreas Mikkelsen continued their intense battle for fourth place, but Kris Meeke threatened to join the party with some increased pace in the afternoon.

Evans and Mikkelsen set an identical time on Coiluna-Loelle, but Meeke stole 3.1s from Evans to close to within 10.3s.

Meeke continued to apply the pressure on Monti di Ala, taking another 3.6s from Evans as Mikkelsen halved Evans’ buffer to trail by just 1.3s overall.

The trio therefore started the final stage of the day separated by a mere 6.7s, but Meeke would fall backwards when his Toyota “swapped ends” after picking up a puncture.

Evans would end up caught in some of Meeke’s dust when Meeke rejoined the stage, but would strengthen his hold on fourth place as Mikkelsen’s Hyundai had “no tyres” left. Evans ended the day 7.9s ahead.

Thierry Neuville couldn’t match the pace of Meeke, Evans or teammate Mikkelsen across the afternoon, but was promoted to sixth place when Meeke lost two minutes changing his puncture.

Citroen’s Esapekka Lappi also profited from Meeke’s problems, jumping to seventh place, but lost 5.8s to Neuville across the afternoon to sit 25.9s.

Juho Hanninen had a clean afternoon in a fourth Yaris WRC, as he continued to test various set-ups and components for Toyota. He lies ninth overall, just 1.3s ahead of WRC2 Pro leader Kalle Rovanpera who is now comfortably ahead of team-mate Jan Kopecky after starting the day just 0.6s in front.

Jari-Matti Latvala and Sebastien Ogier both avoided any further drama in the afternoon but find themselves well out of contention following their various woes. Latvala is 20 minutes down from the lead, while Ogier is over an hour back.