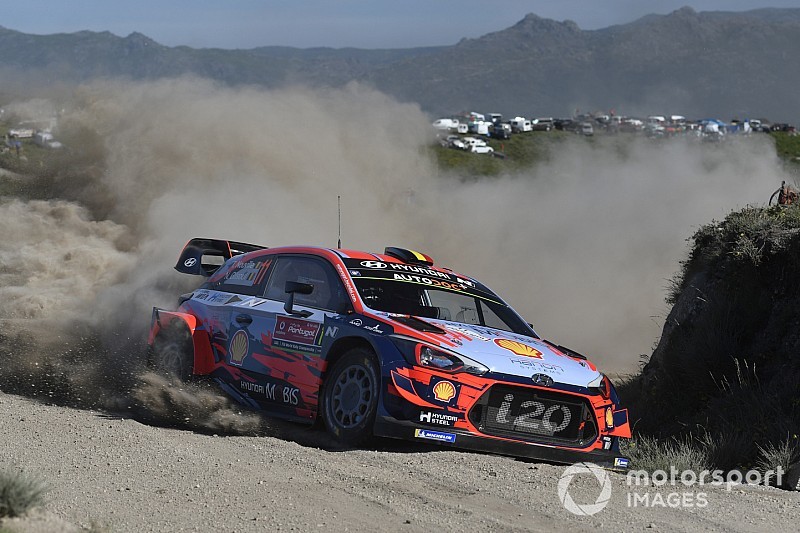 The Korean squad altered the order of Sebastien Loeb and Dani Sordo on three occasions, positioning the i20 Coupe WRCs on the road to run directly ahead of Neuville to sweep the stones and clean the line for the Belgian.

Neuville was quick to point out that no rules had been broken.

"We didn't do anything forbidden," said the second-placed Portugal finisher, speaking before rival Sebastian Ogier made his accusations on Hyundai team principal Andrea Adamo.

"We just tried to stay together as a team and fight as hard as we could for everything we could take and, at the end, we took second position with four points in the powerstage and this a good effort.

"We only lose nine points in the manufacturers' [championship], which really looked very bad on Friday (following mechanical problems for both Loeb and early leader Sordo]. The efforts we have done have brought us the necessary bonus, that's all I can say."

Asked if he thought the tactics had helped him, Neuville added: "I don't know if it helped a lot, but at least it optimised the situation."

Neuville made no comment on rival Ogier's allegations that Adamo was ready to take those tactics further.

Ogier responded to Neuville's comments, saying: "For the strategy there's not much to say. There's nothing forbidden so what can you comment? That's just the way to play it, there's nothing to comment."