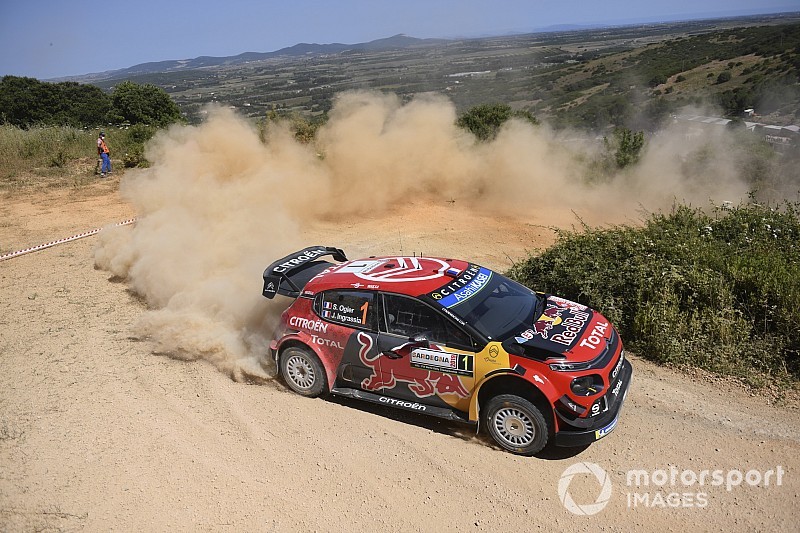 Citroen will consider pulling Sebastien Ogier out of Saturday’s Rally Italy stages if the French firm feels there’s nothing to gain from the C3 WRC running first on the road.

Ogier retired from Rally Italy after breaking a steering arm on the final stage of Friday’s morning loop.

Returning under Rally 2 regulations would leave Ogier running first on the road for a second day in succession, but with very little potential for scoring points from the Alghero-based event.

The world champion is already looking towards the next round of the series in Finland.

“There’s no strategy that can help me right now,” he said. “Let’s see what goes on for the rest of the weekend, but there’s not so much to expect from Sardinia. I’m already thinking to the next rally.”

Even powerstage points are optimistic given that he will be first on the road on an exceptionally loose and sandy test.

Asked if he would consider a tactical approach to day two, team principal Pierre Budar told Motorsport.com: “Why not? If there is nothing to win, nothing to learn and a difficult day opening the road, nothing to help the team, we could consider but we are not at that point yet.

“We will see tomorrow. We will decide. Of course, it’s quite frustrating for him to start and be first on the road, I think he’s fed up with this. It’s not easy to know what to do tomorrow. If we have some parts to test, it could be an idea.”

Ogier was quick to accept blame for the mistake, explaining that he had driven this section of stage three times already – it formed part of Thursday’s shakedown test.

“I knew exactly there were rocks there,” he said. “I don’t know. It looks like I turn[ed] a little too early, it was a bit blind over a bit of a crest, but I knew it was there.”

Ogier admitted he was surprised to find there was no spare steering arm in the car.

He told Motorsport.com: “I would still need 10 minutes to change [it], so it would have compromised the results.

“I thought we had one, maybe it’s something we need to discuss with the team. I’m not sure it would have saved much of the weekend, maybe – but we didn’t have.

Budar said not taking the spare part was a tactical decision.

He added: “It was a decision made to optimise the weight of the car. We prefer to play the performance, but maybe this has to be reconsidered. But, anyway, it wouldn’t really change anything except for a few minutes.”