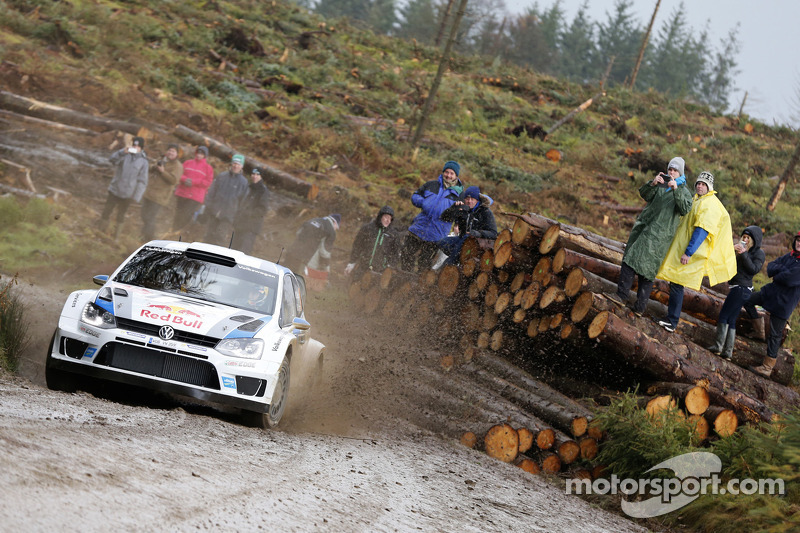 Evans in front on home ground in WRC 2

Sebastien Ogier won two of tonight's (Thursday) three stages to lead Wales Rally GB by 3.2sec from Thierry Neuville as cars returned to the rally base in Deeside after a short and sharp opening leg.

Following the start in Conwy, Ogier stamped his authority on the rally by winning the Gwydyr and Penmachno tests in his Volkswagen Polo R. However, Neuville hit back in Clocaenog to post fastest time in his Ford Fiesta RS.

Heavy rain and strong winds this morning brought testing conditions in qualifying but Ogier was fastest. The Frenchman, wary of just how slippery the gravel tracks in the north Wales forests would be from first in the start order, opted to start second and it paid dividends.

Neuville flirted with disaster in the opening stage when he slid into a ditch and then hit a huge rock in the second stage which flung his car into the air.

Jari-Matti Latvala was brave enough to opt for first in the running order in his Polo R. The Finn was second fastest in both opening stages but dropped 3.4sec with third fastest in Clocaenog and ended the night 5.2sec behind his team-mate in third.

Mikko Hirvonen is fourth in a Citroen DS3, 16.2sec off the lead. The Finn twice slid wide in the opening test and admitted the lack of a pre-event test hadn’t helped his cause. “The car feels OK, but it could be better, but I’m not sure which way to go with any changes,” he said.

Despite struggling with gearchange issues, Mads Ostberg is fifth in a Fiesta RS and the Norwegian lies 3.1sec ahead of fellow countryman Andreas Mikkelsen. Strong times from Mikkelsen in the first and last stages were offset by a poor second test when he couldn’t absorb all the detail from his pace notes.

Robert Kubica is seventh on his World Rally Car debut, the Pole opting for caution as he comes to terms with a new car, a new co-driver, pace notes in Italian and his first time on slippery gravel stages in the dark. “I have a lot of things to learn,” was probably the understatement of the night.

Evgeny Novikov, WRC 2 leader Elfyn Evans and Martin Prokop round off the top 10, all in Fiestas of one sort or another.

Dani Sordo lies 46th after receiving a five minute pre-start penalty when his Citroen team admitted his DS3 was the ninth chassis it had used this season – the limit is eight.

Competitors restart at 06.30 tomorrow and make the long journey south to mid-Wales for two identical loops of three tests, including the classic Hafren and Myherin. With 137.06km of action and only a 15-minute service in Newtown separating the loops, it will be a challenging day.

Welshman Elfyn Evans leads the WRC 2 category of his home round of the World Rally Championship after the first evening of the competition.

The 24-year-old from Dolgellau in mid-Wales won two of Thursday’s trio of night stages in the north Wales forests, to pull a 13.2sec lead over Finland’s Jari Ketomaa.

“It’s been okay, but not easy for sure,” said Evans. “The first stage wasn’t great but things got better and better.

“We’ve got good traction but had to sacrifice some stability to get that, so I was a little nervous in the fast sections, but that’s a comprise we decided to take in testing. The car is feeling good now and I’m looking forward to tomorrow.”

Ketomaa won the opening Gwydyr test but couldn’t match Evans' pace on the faster roads of Penmachno and Clocaenog. “Overall I’m happy but there’s more speed to come from me,” he said. “I took no risks, and in the dark I couldn’t get confidence in the fast stuff - a little too much braking!”

Higgins was another to feel uncomfortable in the darkness - especially early in the first stage when he forgot to turn on his car’s headlights.

“It was certainly better with the lights on, but we haven’t yet found a good driving rhythm,” he said. “Not a bad run, but sometimes we’re off the pace, while at others we’re pushing a bit too hard. It’ll be a lot easier in the daytime. We’re not too far away and there’s definitely more to come from us.”

Eyvind Brynildsen is fourth, just 2.1sec behind Higgins after a trouble-free run in another Fiesta R5. Robert Barrable, also in a Fiesta, rounds off the top five.

Edoardo Bresolin is sixth, with Yazeed Al Rajhi seventh after dropping time on SS1 when he nudged into the back of Michal Solowow’s Fiesta that was stopped on the road.

Neuville and Evans on the pace in Wales