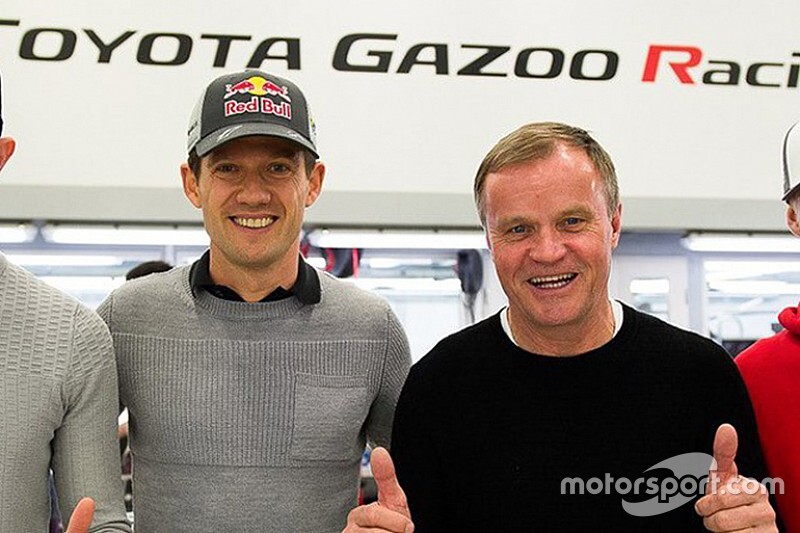 Toyota has revealed an all-new driver line-up for next year's World Rally Championship, with Sebastien Ogier, Elfyn Evans and Kalle Rovanpera signed to drive its factory Yaris WRCs next season.

Ogier's move was telegraphed after he walked out of a Citroen deal a year early last week, which Citroen blamed for its subsequent exit from the WRC.

Evans visited Toyota's factory last month and was understood to have agreed terms with team principal Tommi Makinen soon after, while Motorsport.com revealed Rovanpera would be driving a factory Yaris back in June.

Six-time champion Ogier, who tested the Yaris in 2016 before deciding to move to M-Sport, said he was excited about a move that he felt will keep his hopes of winning a world title with a third different manufacturer alive.

"I'm definitely very excited to be joining this team," he said. "It's another new challenge for me and I'm looking forward to it.

"We already discussed it at the end of 2016 and although we didn't manage to make it happen at that time, I'm now overwhelmed to start working with such an iconic brand as Toyota as well as my childhood idol Tommi Makinen.

"The plan is to aim for some success together and to try to win back the world championship."

Ogier's deal is for 2020 only as he continues to head towards retirement from the WRC at the end of next year. Evans has agreed a two-year deal.

Toyota's 2020 line-up is discussed on the latest episode of our rallying podcast...

Makinen said Ogier's arrival was a demonstration of what Toyota had achieved since it returned to the WRC in 2017.

"I'm really pleased with the driver line-up we have been able to put together for next season," said Makinen.

"I believe it provides us with a great balance in our team as we target more championship trophies next year and in the future.

"We know how strong Sebastien is and we're all looking forward to working with him and Julien [Ingrassia, co-driver]. Being able to attract a driver with his record says a lot about what we have achieved in such a short space of time with this team."

Makinen was fulsome in his praise for Evans, adding: "Elfyn is a driver I have been watching for some time.

"We've seen that he can have the speed to win on almost any surface, but he can also be very clever when needed and score good points."

Evans admitted his early dealings with Makinen and the team had reassured him for the future.

"This is a great opportunity for me and I'm really excited to get going," he said.

"Tommi has been very successful as a driver and knows what it takes to perform at this level.

"It's been great to deal with him so far and I'm looking forward to getting to know the team better as we ramp up towards the start of next season."

Rovanpera will start all 14 rounds in a third Yaris next season. The 19-year-old has close ties with Makinen and first tested the Toyota aged 16 - when he was faster than both M-Sport driver Teemu Suninen and Citroen outcast Esapekka Lappi on the same stretch of road.

"I've known Kalle since he was very young and it's always been clear that he has something special," said Makinen.

"He still has lots to learn, but I believe that he is ready for this step now."

Rovanpera added: "I think the goal for any young rally driver is to have a seat in a World Rally Car and now that chance is coming for me.

"It has been great for me to see how Tommi has been trusting me already, when I first tested the car a few years ago, and it's now really nice to be fully a part of his team."

Ott Tanak, who claimed the WRC drivers' title with Toyota this year, has joined Hyundai, while Toyota's other 2019 drivers - Jari-Matti Latvala and Kris Meeke - are without deals for next season.